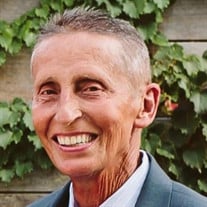 Jerry Lee Rabik, 72, of Shellsburg, Iowa, formerly of Cedar Rapids, Iowa, passed away peacefully after a courageous 16-year battle with cancer on Tuesday, November 30, 2021, at the Dennis & Donna Oldorf Hospice House of Mercy in Hiawatha, Iowa, with his wife and children by his side. A visitation will be held from 1 – 3 p.m. on Sunday, December 5, 2021, at Murdoch-Linwood Funeral Home & Cremation Service in Cedar Rapids. A memorial service with military honors will follow at 3 p.m. on Sunday at the funeral home. Dinner will follow the service at the Legacy Center at Murdoch-Linwood. Jerry was born January 3, 1949, in Cedar Rapids, the son of Stanley and Freda (Tompkins) Rabik. In 1967, he graduated from Washington High School. Jerry served honorably in the United States Army from 1969-1971; he did multiple tours in the military during Vietnam. Jerry was united in marriage to Patricia Boubin on May 23, 1981, in Cedar Rapids. He worked as head supervisor at Weyerhaeuser/International Paper for 43 years until his retirement in 2013. Jerry was the best husband, father, provider that a family could ask for, and will be greatly missed by all who knew him. Survivors include his wife of 40 years, Patricia Rabik; daughters, April (Brad) Andersen and Ashley (Patrick) Maas; son, Sean Rabik; stepdaughter, Jamie Fortner; grandchildren, Brayden Andersen, Kali Cecil, Avalynn Maas, Skyler Landon, McKenna Landon, Trevin Landon, and Savannah Fortner; parents, Stan and Freda Rabik; four siblings, Larry Rabik, Barb Reeves, Janet Hughes, and Julie Gerace; and many nieces and nephews. He was preceded in death by his son, Jerry Lee Rabik, Jr. Memorials may be directed to the Dennis & Donna Oldorf Hospice House of Mercy, or to Linn County Veterans Affairs.

The family of Jerry Lee Rabik created this Life Tributes page to make it easy to share your memories.

Send flowers to the Rabik family.