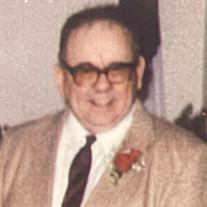 Jerry Lee Sayers, 87, of Mount Vernon, Iowa, died Wednesday, December 22, 2021. A funeral service will take place at 2 p.m. on Thursday, January 6, 2022, at Murdoch-Linwood Funeral Home & Cremation Service in Cedar Rapids, Iowa, with a visitation one hour prior. Burial will follow the service at Linwood Cemetery in Cedar Rapids. Jerry was born December 19, 1934, in Des Moines, the son of Ben and Bessie Sayers. He graduated from Des Moines High School. Jerry served honorably in the United States Army from 1957-1959. He was united in marriage to Dorothy “JoAnn” (Mullinex) Kniffen on October 28, 1989, in Nashua, Iowa. Jerry worked for the United States Post Office for 31 years and then worked as a bus driver for Indianola Schools until his retirement in 1997. He was an avid fisher and remote-control airplane flyer. Survivors include his stepchildren, Tim (Pat) Kniffen and Pam (Dean) Rickabaugh; grandchildren, Tracy, Crystal, and Heather; great-grandchildren, Deaundre, Matt, Vania, and Maddilynn; and great-great-grandson, Braxton. He was preceded in death by his parents, Ben and Bessie Sayers; and his wife, JoAnn in 2012. Memorials may be directed to the family.

The family of Jerry Lee Sayers created this Life Tributes page to make it easy to share your memories.

Send flowers to the Sayers family.