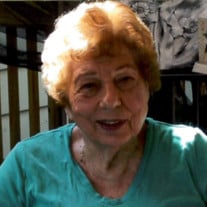 JoAnn Reese, 94, of Springville, Iowa, passed away on Saturday, October 24, 2020, at her daughter’s home. The family will greet friends from 10 – 11 a.m. on Thursday, October 29, 2020, at Murdoch Funeral Home & Cremation Service in Marion where a Funeral Service will follow beginning at 11 a.m. conducted by Mark McDermott, Director of Pastoral Care at Mercy Medical Center in Cedar Rapids. Burial will take place at Cedar Memorial Park Cemetery in Cedar Rapids. All guests are respectfully requested to wear a face mask and practice social distancing. JoAnn was born January 9, 1926, in Waverly, Iowa, the daughter of LeLyn and Dorothy (Baumel) Miller. She graduated from Marion High School in 1943 and attended Iowa State University and Coe College. On January 16, 1945, at her grandparent’s home JoAnn was united in marriage to Clarence Tudeen. He passed away on November 28, 1983. In Springville at the Presbyterian Church on January 11, 1986 she married Harold Reese. He passed away in January of 1997. JoAnn worked at Killian’s Department Store in Downtown Cedar Rapids and Lindale Mall for 10 years as a supervisor of Ready to Wear department, then as a transporter at Mercy Hospital in the Radiation Center before working as a Certified Nursing Aide providing home health for Gentiva Home Health for many years, retiring in 2009. JoAnn was an active member of the Springville Presbyterian Church, serving as an Elder and Deacon for many years as well as being a part of the United Presbyterian Women’s group. She also was a member of the Springville Garden Club, Book Club and Red Hats Society. JoAnn loved breakfast at Hy-Vee with her daughters and granddaughters and was “Grandma Deeny” to many daycare kids. She loved her family and family gatherings. She is survived and lovingly remembered by two sons, Stephen (Becky) Tudeen of Princeton, Missouri and John Tudeen of Marion, Iowa; two daughters, Patricia (Robert) Harris of Marion and Melinda (Patrick) Hoyt of Springville; 13 grandchildren; 34 great-grandchildren; sister-in-law, Bettie Miller of Anamosa, Iowa; and several nieces and nephews. JoAnn was preceded in death by her parents; husbands; and one brother, John Miller. A Memorial Fund has been established in JoAnn’s memory.

The family of JoAnn Reese created this Life Tributes page to make it easy to share your memories.

JoAnn Reese, 94, of Springville, Iowa, passed away on Saturday,...

Send flowers to the Reese family.