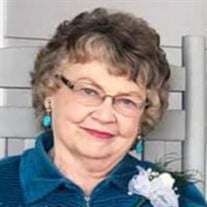 Joann Young, 87, of Cedar Rapids, Iowa, died Sunday, November 22, 2020, at The Gardens of Cedar Rapids, after an over 10-year battle with Multiple Myeloma. The family has decided not to hold a service, due to COVID-19. A private graveside service will be held at Linwood Cemetery in Cedar Rapids. Murdoch-Linwood Funeral Home & Cremation Service in Cedar Rapids is assisting the family. Joann was born on November 16, 1933, near Green City, Missouri, the daughter of Phineas and Ethel (Herndon) Kelley. On June 21, 1952, she married Glen A. Young and after Glen’s service in the Army they moved to Cedar Rapids. Joann worked for Square D Company for 17 years before making a career change to be a stay-at-home mom, after the birth of their son Greg. Joann and her husband owned and operated Glen’s Oil Inc. for many years until their retirement in 1996. They enjoyed many summers at their cabin at Lake Delhi, entertaining friends and family and making lifelong memories. She was an excellent cook and hostess. She looked forward to every Thanksgiving when her niece Lisa would bring her family from Chicago to visit, often planning months in advance! She was a loving wife, mother, grandmother, aunt, and friend. Joann loved singing, playing piano, putting puzzles together, playing card games and traveling. Glen and Joann traveled south for several winters until his death in 2005. She was able to do some traveling up into her 80’s, flying by herself to visit her nephew Jerry in Palm Springs, California. Special time spent with her three grandchildren was always a top priority. Her walls were always covered with pictures of every age or event they were ever in. She was a member of Calvary Baptist Church. Joann is survived by her son, Greg Young and his wife, Rachel; three grandchildren, Lauren Nicole Young, Addison Marie Young, and Carter Glen Young, all of Cedar Rapids; and many other extended family members. She was preceded in death by her parents; husband, Glen; two brothers, infant Ralph Kelley and Dale Kelley; and two sisters, Blanche (Virgil) Bankes and Blandetta (John) Bramble. The family would like to extend a special thank you to Stoney Point Meadows, UnityPoint Hospice, and The Gardens of Cedar Rapids for friendships made and the exceptional care given to Joann. Memorials may be directed to the family.

Joann Young, 87, of Cedar Rapids, Iowa, died Sunday, November 22, 2020, at The Gardens of Cedar Rapids, after an over 10-year battle with Multiple Myeloma. The family has decided not to hold a service, due to COVID-19. A private graveside service... View Obituary & Service Information

The family of Joann Young created this Life Tributes page to make it easy to share your memories.

Send flowers to the Young family.