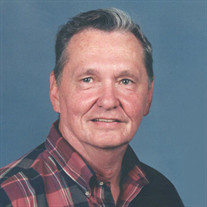 Joe Dean Butterfield, 84, formerly of Marion, passed away on Sunday, January 10, 2020, at Briarwood Health Care Center, in Iowa City, due to complications of Covid-19. In agreement with his wishes, cremation has taken place. The family will hold a celebration of his life at a later date, when it is safe to gather. Joe was born on December 6, 1936, at the Salvation Army Hospital, in Des Moines. He was adopted as an infant by Sada LaRue (Beckley) and James Butterfield. Joe grew up in, and graduated from, Central City in 1955. He was a strong student, proud Eagle Scout, and a skilled athlete. Joe and his brother, Don formed a dynamic duo on the basketball court and baseball field. He joined the U.S. Army shortly after graduation. Stationed in St. Andre, France, at the Aerial Support Station, Joe worked in the supply unit and played basketball for the Friendship Force, receiving an accommodation for his contributions to the Franco-American Relations program. Fresh out of the Army, Joe joined his mother, father, and brother, Willard who had recently moved to Colorado. In 1961, during a visit to Iowa, he met Connie McCright, the woman he referred to as his “beautiful bride” to the very day he died. Married in 1962, at the Troy Mills Church, the couple departed forthwith for Sterling, Colorado, where Joe attended Northeastern Junior College. He went on to earn a BS and Master’s degree in Zoology from Colorado State University. During the summers, he worked for and lived in, Rocky Mountain National Park, helping to re-open Old Fall River Road. The couple returned to Iowa in 1969, for Joe to start his new position as the Superintendent of Linn County Parks. He particularly enjoyed developing the Morgan Creek Arboretum, opening the Abbe Creek School and Museum, and living with his family in Wanatee (thankfully, formerly known as Squaw Creek) Park. In 1975, Joe became the Marion Parks and Recreation Executive Director, where he played a key role in expanding and strengthening the city’s park system. A few of the accomplishments that Joe was most proud of were passing the bond to build the “new” Marion swimming pool; developing Hanna Park; creating the Seniors’ Center; starting the Farmers’ Market; incorporating the old train depot into City Square Park; building the Peg Pierce softball complex; and helping to establish the Marion Arts Council and launch the Swamp Fox Festival. In 1999, the city of Marion honored Joe’s work by establishing a park in his name (NE side). Joe appreciated life and adored his family. He loved his country, abhorred racism, and advocated for equality, values he passionately instilled in his children. Although diagnosed with Multiple Sclerosis at only 33 years old, Joe enjoyed long periods of remission. He was a man who believed in the healing power of a milkshake to cure ailments, ranging from the chicken pox to a broken heart. Joe was ever present at his kids’ activities, relished Hawkeye victories, and was a devoted Cubs fan. He was an avid golfer and never met a fishing line he didn’t want to cast. Joe served the community as an officer in the Marion-East Cedar Rapids Rotary Club, with Trees Forever, and as an elder of Marion Christian Church. He is survived and lovingly remembered by his beautiful bride of 58 years, Connie Butterfield; three children, Lindsey (Dawn) Butterfield and Jo Butterfield (Doug Hansel) both of North Liberty, and Tara Butterfield of Chicago, Illinois; three grandchildren, Brianna Butterfield, Amber (Mike) Benusa and Josh Grothe; three great-grandchildren, Charlee, Rolland and Andrew; two brothers, Donald (Cindy) and Willard, both of Colorado; and many nieces, nephews, sisters-in-law and brothers in-law who all adored him dearly. Joe was preceded in death by his parents; and two granddaughters, Emily and Nicole. Since 2001, Joe resided at Briarwood Health Care Center in Iowa City. The family would like to express their sincere heartfelt gratitude to the entire Briarwood Staff for the outstanding care they provided. Their efforts during the Covid-19 crises have been incomparable. In lieu of flowers, please consider a memorial donation in Joe’s name to either: Trees Forever (http://www.treesforever.org/Give) or the Multiple Sclerosis Society (https://secure.nationalmssociety.org/site/Donation2?df_id=55995&55995.donation=form1).

Joe Dean Butterfield, 84, formerly of Marion, passed away on Sunday, January 10, 2020, at Briarwood Health Care Center, in Iowa City, due to complications of Covid-19. In agreement with his wishes, cremation has taken place. The family will... View Obituary & Service Information

The family of Joe Dean Butterfield created this Life Tributes page to make it easy to share your memories.

Joe Dean Butterfield, 84, formerly of Marion, passed away on...

Send flowers to the Butterfield family.