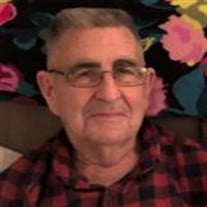 John “Doug” Thompson, 78, of Cedar Rapids, Iowa, passed away after a courageous battle with cancer on Saturday, August 21, 2021, at the Dennis & Donna Oldorf Hospice House of Mercy in Hiawatha, Iowa. A visitation will be held from 5:00 – 7:00 p.m. on Friday, August 27, 2021, at Murdoch-Linwood Funeral Home & Cremation Service in Cedar Rapids. A funeral service will take place at 10:30 a.m. on Saturday, August 28, 2021, at the funeral home. Burial will follow at Cedar Memorial Park Cemetery in Cedar Rapids, with full military honors. Doug was born on May 18, 1943, in Cedar Rapids, the son of John and Ruth (Tilson) Thompson. He graduated from Jefferson High School in 1961 and then attended Cedar Rapids Barber College. Doug cut hair at Dan’s Barber Shop. He served in the United States Army during the Vietnam war and was stationed in Germany. Doug later worked for General Mills until his retirement in 2004. He was united in marriage to Linda Watkins on July 8, 1967, at Trinity Lutheran Church in Cedar Rapids. Doug enjoyed watching NASCAR and Hawkeye Downs races. He was known for his perfect yard. Doug liked to travel, especially to Branson, Missouri, and enjoyed trout fishing in Bennett Springs, Missouri. He liked listening to Country and Western music. Above all else, Doug loved spending time with his family. Survivors include his beloved wife of 54 years, Linda Thompson of Cedar Rapids; children, Brian (Alexandra) Thompson of Oakridge, North Carolina, Jeff Thompson, and Julie (Steve) Hollan, all of Cedar Rapids; four grandchildren, Ryan and Larissa Thompson, and Brody and Dalton Hollan; and former daughter-in-law, Gloria Thompson of North Carolina. He was preceded in death by his parents, John and Ruth Thompson; brother, Dr. Robert Thompson; and sister, Joni Thompson. In lieu of flowers, memorials may be directed to the family for a memorial fund to be established.

John &#8220;Doug&#8221; Thompson, 78, of Cedar Rapids, Iowa, passed away after a courageous battle with cancer on Saturday, August 21, 2021, at the Dennis & Donna Oldorf Hospice House of Mercy in Hiawatha, Iowa. A visitation will be held from... View Obituary & Service Information

The family of John 'Doug' Thompson created this Life Tributes page to make it easy to share your memories.