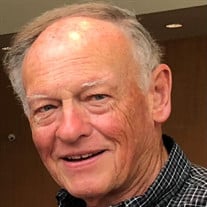 John Thomas Dulle peacefully departed this life on August 9, 2021, surrounded by his family at Mercy Medical Center in Cedar Rapids, IA. John’s heart, despite its limitless capacity for love, generosity, and passion for golf, took the kind of break from its work that John never would and that caused his death. John brimmed with optimism, smiled perpetually, met no strangers, earned no enemies, and competed with vigor. Most everyone who knew John adored him, including his wife, three children, two step-sons, three daughters-in-law, seven grandchildren, and innumerable friends. Charming, warm, amiable, but sometimes obstinate, John loved people as much as he loved fun. John will be honored on August 12, from 4p to 7p at Murdoch Funeral Home & Cremation Service, memorialized at St. Joseph Catholic Church on August 13 at 12p, and then celebrated at Hunter’s Ridge Golf Course on August 13 from 4p to 8p. Unsurprisingly, John specifically requested the celebration part. Born to Clemens and Frances Dulle in Jefferson City, Missouri, on August 31, 1943, John entered the world 22 minutes after his twin sister, Jeane. John grew up with—and delighted in the company of—his seven siblings. He attended Helias High School in Jefferson City and then the University of Missouri in Columbia. John launched his varied and successful career in business working for Mobil Oil after college. Later, he would devote his efforts to Coca-Cola, Skogman Realty, Blimpie Subs and Salads, and real estate investment. In 1970, John married Patsy Lax and together they gave life to Melissa, John Houston, and Brent. They later divorced. John met Kathy (McLaughlin), who offered to cook dinner for him on their first date and did not cancel when he arrived with a box of Franzia wine. John and Kathy married in 1999 and he welcomed her sons, Zach and Tyler, as if they were his own. They lived happily together in the Hunters Ridge Golf Course community in Marion, Iowa, while also enjoying the cold months in Indio, California. John loved golf and played year-round. More so than the golf, he loved the community of friends he made at Hunters Ridge. John came from a big family and family mattered most to him. The Dulle clan numbers 175 people, and he loved each one. John had a passion for golf and rooted hard for the St. Louis Cardinals and the Iowa Hawkeyes. Few places brought him more joy than the golf course, Busch Stadium, and Kinnick Stadium. John developed a love for travel, and he and Kathy did so extensively. A mantra he lived by, he was known to remind others that “Life is not a dress rehearsal.” John’s wife, Kathy; daughter, Melissa; sons, John (Kari) and Brent (Emily); step-sons, Zach and Tyler (Lexi); grandchildren, Austin, Trenton, Annalyse, Arthyr, Lincoln, Arlo, and Miriam all survive him and will forever miss him profoundly. He is also survived by his siblings, Ruth Ann (Donnie) Schneiders, Mary Sue Mueller, Carolyn (Bill) Case, Jeane (Richard) Bacon, Jim (Jeanette) Dulle, and Steve (Diane) Dulle. His parents, Clem and Frances, his brother, Clem Dulle, Jr., his brother in-law, Donnie Mueller, and mother-in-law, Bernie McLaughlin, all preceded him in death. In lieu of flowers, memorials may be directed to the family to support local youth golf programs or the American Heart Association.

John Thomas Dulle peacefully departed this life on August 9, 2021, surrounded by his family at Mercy Medical Center in Cedar Rapids, IA. John&#8217;s heart, despite its limitless capacity for love, generosity, and passion for golf, took the... View Obituary & Service Information

The family of John Thomas Dulle created this Life Tributes page to make it easy to share your memories.

Send flowers to the Dulle family.