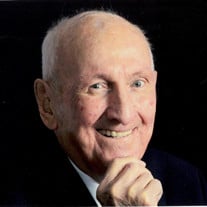 John Roger Howe, 88, of Cedar Rapids, Iowa, passed away on Thursday, November 26, 2020, at his home. Per John’s wishes, cremation has taken place and no public services will be held at this time due to the COVID-19 pandemic. Inurnment will take place at Fort Snelling Cemetery in Minneapolis, Minnesota. John was born on March 25, 1932, in Glencoe, Minnesota, the son of Ellie and Frances (Wright) Howe. He graduated from Glencoe High School and went on to become a broadcast engineer graduating from Brown Institute. John served in the United States Army during the Korean War. On June 29, 1953, in Northwood, Minnesota, he was united in marriage to Elaine Elizabeth West. She passed away in November of 2016. John was a broadcast engineer at WCCO in Minneapolis, Minnesota, for 17 years. He retired as an electronic manufacturing representative in 1999. John was a member of Lutheran Church of the Resurrection in Marion, Iowa, and was a lifetime member of the VFW and the American Legion, and a 50 year member of the Zuhrah Masonic Temple where he was a 33rd Degree Master Mason and Shriner. He is survived by his four sons, Roger (Karla) Howe of Maple Grove, Minnesota, Timothy (Susan) Howe of Coon Rapids, Minnesota, Curtis Howe of Cedar Rapids, and Doug (Kathy) Howe of Marion; nine grandchildren, Randy, Nicole (Andy) Robertson, Elya, Luke, Erik (Samantha), Nathan, Jessica (Quentin) Thurmond, Andrew, and Chloe (Andrew) Konigsmark; nine great-grandchildren; and two sisters, June (Richard) Neuman of Lodi, California and Barbara (Sheridan) Petersen of Brownton, Minnesota. John was preceded in death by his parents, wife, Elaine; and sisters, Lois Ann Hanson and Donna Mae Schostock. Memorials in John’s memory may be directed to the family.

John Roger Howe, 88, of Cedar Rapids, Iowa, passed away on Thursday, November 26, 2020, at his home. Per John&#8217;s wishes, cremation has taken place and no public services will be held at this time due to the COVID-19 pandemic. Inurnment... View Obituary & Service Information

The family of John Roger Howe created this Life Tributes page to make it easy to share your memories.

Send flowers to the Howe family.