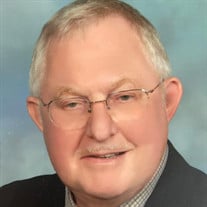 John James Miller, 77, of Marion, Iowa, passed away on Thursday, December 31, 2020, at his home. In accordance with John’s wishes, cremation has taken place. A Celebration of John’s Life is being planned for the Spring of 2021. A private family committal service will take place at Green Hill Cemetery, near Edgewood, Iowa. John was born on March 18, 1943, in Edgewood, Iowa, the son of William and June (Rhines) Miller. He graduated from Strawberry Point High School in 1961. On November 19, 1966, at St. Joseph Catholic Church in Marion, John was united in marriage to Patricia Berntsen. To this union, five children were born. He was employed for many years in Industrial and Agriculture as a salesman. John was a member of Marion United Methodist Church. He loved being outdoors, had a huge love for trees, and enjoyed gardening and doing landscaping. John was known for the soft spot he had for animals. He also enjoyed watching Iowa football and basketball, and spending time with his family. John will be greatly missed by all who knew and loved him. He is survived and lovingly remembered by his wife of 54 years, Patricia Miller of Marion; four children, Kelley Miller (Brian Quick) of Davenport, Iowa, Carey (Brian) Studier of Cedar Rapids, Shanna Miller of Davenport and Ryan (Jessica) Miller of Marion; eight grandchildren, Colin Klamerus, Jesse Geers (Amanda McDonagh), Storm Miller, Jack Studier, Max Studier, Ethan Miller, Isabella Miller and Isaac Miller; one brother, Robert (JoAnn) Miller of Marion; one brother-in-law, Stan Smith of Pharr, Texas; and several nieces and nephews. John was preceded in death by his parents; one daughter, Erin Miller; and sister, Phyllis Smith. In lieu of flowers, the family respectfully requests that donors plant a tree with their family to help rebuild our city’s canopy.

The family of John James Miller created this Life Tributes page to make it easy to share your memories.

John James Miller, 77, of Marion, Iowa, passed away on Thursday,...