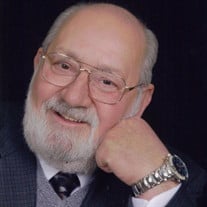 John Steve Sandor, 78, of Marion, Iowa, passed away on Thursday, October 28, 2021, at Mercy Medical Center in Cedar Rapids, Iowa. A Memorial Service will be held at 2:00 p.m. on Monday, November 8, 2021, at St. Mark’s Lutheran Church in Cedar Rapids, Iowa, conducted by Pastor Steve Qualben. Murdoch Funeral Home & Cremation Service of Marion is assisting the family. John was born on December 1, 1942, in Akron, Ohio, the son of John, Jr. and Emma Mary (Harcar) Sandor. He was a 1960 graduate of East High School in Akron. On July 25, 1983, John was united in marriage to Kay Anne Ford in Cleveland, Ohio. He retired from selling Insurance and began doing what he enjoyed most, woodworking. He sold his pieces to the Amana Furniture Store and gave some away. John enjoyed reading, two of his favorite authors were Clive Cussler and Louis L’Amour. He also enjoyed playing games on his phone and sports. John was a devoted husband and will be greatly missed by all who knew and loved him. John is survived and lovingly remembered by his wife of 38 years, Kay; three children, Mark (Tonya) of Lubbock, Texas, Deborah (Russell) of Port Charlotte, Florida, and Doug (Tina) of Broken Arrow, Oklahoma; eight grandchildren; five great-grandchildren; sister, Jean Sandor of Stow, Ohio; three sisters-in-law, Sue Ellen (David) Reid of Wisconsin, Lois Jean (Jay) Greer of Oregon, and Janice Rae Clark of Nebraska; and numerous nieces, nephews, and cousins. He was preceded in death by his parents; one brother, David; two sons, Gavin and Franklin; and one daughter, Elizabeth. In lieu of flowers, memorials in John’s memory may be made to the American Cancer Society at 4080 1st Avenue NE #101 in Cedar Rapids, Iowa, 52402.

The family of John Steve Sandor created this Life Tributes page to make it easy to share your memories.

John Steve Sandor, 78, of Marion, Iowa, passed away on Thursday,...

Send flowers to the Sandor family.