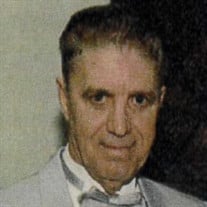 John W. Thibadeau, 95, of Independence, formerly of Manchester, Iowa, passed away on Wednesday, November 10, 2021, at ABCM East Campus in Independence, Iowa. Visitation for John will be Saturday, November 13, 2021, from 10:00 to 11:00 a.m., at Clifton-Murdoch Funeral Home & Cremation Service, Earlville, with a Funeral Service following at 11:00 a.m. Burial will take place at Fairview Cemetery in Earlville. Clifton-Murdoch Funeral Home & Cremation Service, Earlville is in charge of arrangements. John was born September 9, 1926, in Delhi, Iowa, the son of Lester and Zelda (Fischer) Thibadeau. He attended Country School in Delaware County. John enlisted into the Army and served our country proudly. John married Phyllis Herman on November 23, 1947, in Bethany, Missouri. He was employed by Buck Grapes, Limestone and Gravel, Illinois Central Railroad, worked construction and then the City of Manchester for many years. John was a lifelong member of the VFW Post #6637 and American Legion Post #45. In his early years he enjoyed hunting and fishing. He also enjoyed watching his favorite Perry Mason and Western shows, going for drives with Phyllis to look at how the crops were coming along. Most of all John was a devoted husband, father and Grampy, who was very proud of his families accomplishments. John is survived by his son, Bill (Teresa) Thibadeau of Manchester; six grandchildren, LaVon (Tom) Morris, Yvette, Travis (Kendra), Brian (Joy), Baillie and Wyatt; twelve great-grandchildren; one great-great granddaughter and his brother Delmar (Doris) Thibadeau of Anamosa. He was preceded in death by his parents, Lester and Zelda Thibadeau; wife of 66 years, Phyllis Thibadeau; son, James; daughter, Mary Ann; and brothers, Lester and Leon. Please share a memory of John at www.murdochfuneralhome.com under obituaries.

The family of John W. Thibadeau created this Life Tributes page to make it easy to share your memories.

Send flowers to the Thibadeau family.