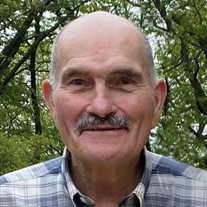 Joseph “Joe” T. Henderson, 73, of Coggon, Iowa, passed away on Sunday, April 24, 2022, at Summit Pointe in Marion, Iowa. Prayer vigil will be held at 3:30 p.m. on Thursday, April 28, 2022, at Murdoch Funeral Home & Cremation Service in Central City, Iowa, visitation will follow from 4 to 7 p.m. at the funeral home. Funeral service will be held at 10:30 a.m. on Friday, April 29, 2022, at St. John’s Catholic Church in Coggon with Father Nick March officiating. Visitation an hour prior to funeral service at the church. Inurnment will take place at a later date at Mt. Olivet Cemetery in Coggon. Joe was born on March 24, 1949, in Manchester, Iowa, the son of WT “Tom” and Helen Jean (Merritt) Henderson. He was a 1967 graduate of North Linn of Coggon High School and went on to buy his family farm, a heritage farm that has been in his family for over 155 years. On May 18, 1968, Joe was united in marriage to Sandra “Sandy” Smith at St. John’s Catholic Church in Coggon. Along with running the farm he was also a concrete contractor for over 35 years, drove Ready Mix concrete trucks, sold rocks and boulders to landscapers and did snow removal in the Coggon area. Joe enjoyed yardwork, gardening and growing sweet corn. He spent his spare time playing cards and attending his children and grandchildren’s sporting events. Joe was a member of St. John’s Catholic Church in Coggon and enjoyed singing in the choir. He will be greatly missed by all who knew and loved him. Joe is survived and lovingly remembered by his wife of 53 years, Sandra “Sandy” of Coggon; two sons, Alan Henderson of Waterloo, Iowa, and Corey Henderson of Cedar Rapids, Iowa; one daughter, Angela (Loras) Klostermann of Coggon; six grandchildren, Kyler, Emily, Katie, Kylie, Kaleb, and Kamryn; one great-grandson, Maveryk; and one sister, Sherry Zumbrunnen of Phoenix, Arizona. He was preceded in death by his parents; son, Steven in infancy; and two sisters, Rhoda Trefz and Karen Crowley. Memorials in Joe’s memory may be directed to Hospice of Mercy or to the family for designation at a later date.

The family of Joseph Thomas Henderson created this Life Tributes page to make it easy to share your memories.

Send flowers to the Henderson family.