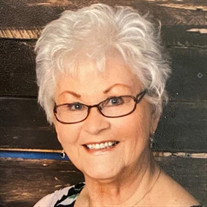 Judy (Lowe) Manning, 81, of Cedar Rapids, Iowa, died peacefully at home surrounded by her family Friday, December 31, 2021. Visitation will be held from 4:00 until 7:00 p.m. Monday, January 10, 2022, at Murdoch-Linwood Funeral Home & Cremation Service, Cedar Rapids where a Vigil Service will begin at 7:00 p.m. Funeral Mass will be held 10:30 a.m. Tuesday, January 11, 2022, at St. Ludmila Catholic Church, Cedar Rapids. A Rosary will be said at 10:10 a.m. before the start of Mass at the church on Tuesday. A livestream of the Funeral Mass may be accessed at: www.stludmila.org. Burial will follow at Czech National Cemetery, Cedar Rapids. Judy was born March 23, 1940, in Cedar Rapids the daughter of Terry E. and Velma G. (Nandell) Lowe. Judy had a 64-year love story with Richard “Dick” Manning. Their “first day” was July 25, 1957, their “yes day” was July 25, 1958, and their “best day” was April 18, 1959. To this union, three children were born. Judy worked as a retail banker with U.S. Bank for 23 years until her retirement. She had previously worked as a clerk at Warehouse Market. Judy was a woman of deep faith. She was an active member of St. Ludmila Catholic Church, serving as religious Education Director and Choir Director. Judy was a proud member of the Red Hat Society. Judy and Dick spent many fond years wintering in Ft. Walton Beach, Florida, making many wonderful friends along the way. Judy had a close relationship with her grandchildren. She was a talented crafter, once even sewing custom cheerleading outfits so her granddaughters could match their older siblings’ sports uniforms. Judy enjoyed many dog companions over the years and will be missed by her Yorkie-Poo pup, Bo. Since the onset of her cancer diagnosis, Judy lived by the mantra “FROG:” Forever Rely on God. Judy lived a beautiful life of love, faith, and devotion to her family. She will be dearly missed by those who love her. Judy is survived by her husband, Dick Manning; children: Craig Manning (Cindy Lowey) of Ft. Walton Beach, Florida; Kevin Manning (Matt Fogo) of Lexington, Virginia; and Gina (Tim) Burke of Ryan, Iowa; eight grandchildren; and seven great-grandchildren. Also surviving are her siblings: Jack (Ruth) Lowe, Roger (Shirley) Lowe, Tom (Sandy) Lowe, Doug (Laurie) Lowe, Carol (Rick) Allard, Nancy (Larry) Suchomel, and Delores (Walter) Musel. Judy was preceded in death by her parents; brothers Eugene, Lee, and Ronald Lowe; and sister Janet Clevenger. In lieu of flowers, memorials in Judy’s name may be made to the Hall-Perrine Cancer Center.

The family of Judy (Lowe) Manning created this Life Tributes page to make it easy to share your memories.

Send flowers to the Manning family.