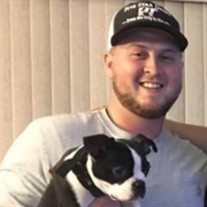 Kade Blackford, 24, of Liberty, Missouri, formerly of Marion, Iowa, passed away on October 26, 2021. The family will greet friends from 4:00 to 7:00 p.m. on Wednesday, November 3, 2021, at Antioch Christian Church in Marion. A Funeral Service will be held at 10:30 a.m. on Thursday, November 4, 2021, at the church. Murdoch Funeral Home & Cremation Service of Marion is assisting the family. Kade was born on October 9, 1997, in Cedar Rapids, Iowa, the son of Jeff and Robin (Cleppe) Blackford. He graduated from Linn-Mar High School in 2016. Kade went on to graduate from Missouri State University in May of 2020, and was set to graduate with his MBA in December. He worked as a Bank Examiner for the State of Missouri. Kade loved the great outdoors, including fishing and biking. He was a big country music fan and loved going to concerts. Kade also enjoyed attending sporting events. Most of all he loved spending time with his family. He is survived by his parents, Jeff and Robin Blackford of Marion; two brothers, Keaton of Tuscan, Arizona, and Seth of Marion; his beloved dog, Dean; grandparents, George and Kathie Cleppe of Marion, and Lorna Blackford of Marion; aunts and uncles, Scott Cleppe, Tami (Tom) Pfeifer, Todd (Maria) Cleppe, and Cindy (Craig) Baldwin; cousins, Matt Baldwin, Kaitlyn Baker, Nathan Baldwin, Grant, Trey and Beau Smith, and Dylan, Alysia and Deryck Cleppe. Kade was preceded in death by his grandfather, Richard Blackford; great-grandparents, Gus and Mary Cleppe, and Ralph and Shirley Payne; and cousin, Brock Smith. In lieu of flowers, memorials in Kade’s memory may be directed to the family, to be designated at a later date.

Kade Blackford, 24, of Liberty, Missouri, formerly of Marion, Iowa, passed away on October 26, 2021. The family will greet friends from 4:00 to 7:00 p.m. on Wednesday, November 3, 2021, at Antioch Christian Church in Marion. A Funeral Service... View Obituary & Service Information

The family of Kade Blackford created this Life Tributes page to make it easy to share your memories.

Send flowers to the Blackford family.