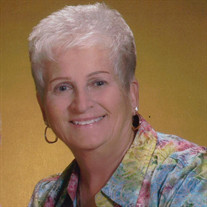 Karole M. Meese, 76, of Marion, Iowa, passed away on Sunday, July 11, 2021, at the Dennis and Donna Oldorf Hospice House of Mercy in Hiawatha, Iowa. In accordance with her wishes cremation has taken place and there will be no services. Karole was born on August 30, 1944, in Storm Lake, Iowa, the daughter of Cleo and Hulda (Mack) Heller. She graduated from Fonda High School in Fonda, Iowa. On November 23, 1963, Karole was united in marriage to Michael N. Meese in Storm Lake, Iowa. She worked for the Linn-Mar School District as the food service assistant and later as the director, retiring in 2000. Karole was a member of St. Joseph Catholic Church in Marion and was a member of the funeral hospitality committee. She was also a member of the Marion American Legion Auxiliary. Karole and Michael enjoyed gambling and traveling, wintering in Florida for the last 15 years where she was on the social committee for their condo. Karole’s number one hobby and joy was her grandchildren. She will be greatly missed by all who knew and loved her. Karole is survived and lovingly remembered by her husband of 58 years, Michael Meese of Marion; son, Todd Meese of Independence, Missouri; daughter, Teri (Steven) Wiebler of Overland Park, Kansas; six grandchildren, Hunter, Sawyer (Laney), Casey, and Dawson Meese, and Kyle and Travis Wiebler; one great-grandson, Gavin Meese; and one grand-dog, Maci Maye. She was preceded in death by her parents; and five siblings, Bill, Mervin, Ronnie, Roger, and Michael Heller. The family would like to extend a special thank you to Dr. Ann Stroh and staff and the staff at the Hall-Perrine Cancer Center and the Dennis and Donna Oldorf Hospice House of Mercy for their loving care. In lieu of flowers, memorials in Karole’s memory may be made to the Hall-Perrine Cancer Center, Mercy Medical Center Foundation at 701 10th Street SE in Cedar Rapids, Iowa, 52403. “Precious in the sight of the Lord is the death of His faithful servants.” Psalm 116:15

Karole M. Meese, 76, of Marion, Iowa, passed away on Sunday, July 11, 2021, at the Dennis and Donna Oldorf Hospice House of Mercy in Hiawatha, Iowa. In accordance with her wishes cremation has taken place and there will be no services. Karole... View Obituary & Service Information

The family of Karole M. Meese created this Life Tributes page to make it easy to share your memories.

Send flowers to the Meese family.