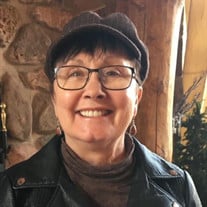 Kathy “Kat” Bashus, 73, of Fairfax, Iowa, died Wednesday, June 8, 2022, at her home. A visitation will be held from 1 – 2 p.m. on Tuesday, June 14, 2022, at Murdoch-Linwood Funeral Home & Cremation Service in Cedar Rapids, Iowa. Kat was born April 17, 1949, in Wyoming, the daughter of David and Stella (Birdie) Steele. She graduated from Tongue River High School in 1968 and went on to attend Sheridan Community College in Sheridan, Wyoming. She was united in marriage to Donald Michael Bashus on May 5, 2001, in Lincoln, Nebraska. Kat worked as a telephone operator for Mountain Bell before starting her career in banking at the Bank of Commerce in Sheridan. She loved her kitties, family, and friends. Survivors include her husband, Don Bashus of Fairfax; stepchildren, Ryan (Emily) Bashus of Marion, Iowa, Eric (Kalina) Bashus of Lincoln, Nebraska, and Neil Bashus (Krissi Casper) of Friend, Nebraska; four grandchildren; and siblings, Dave Steele of Dayton, Wyoming, and DeLynn (Keith) Cooley. She was preceded in death by her parents, David and Stella Steele.

The family of Kathy 'Kat' Bashus created this Life Tributes page to make it easy to share your memories.

Send flowers to the Bashus family.