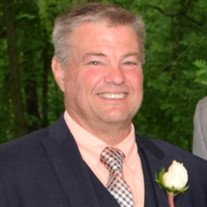 Keith Michael Schlichte, 59, of Cedar Rapids, Iowa, passed away on Sunday, August 1, 2021, at his father’s home in Cedar Rapids. A Funeral Liturgy will be held at 11 a.m. on Saturday, August 7, 2021, at St. Joseph Catholic Church in Marion, Iowa, conducted by Deacon Jeff Volker, where the family will greet friends one hour prior to the service. A private inurnment will take place at a later date. Murdoch Funeral Home & Cremation Service of Marion is assisting the family. Keith was born on May 21, 1962, in Cedar Rapids, Iowa, the son of Marvin Joseph and Carol Ann (Arens) Schlichte. He graduated from Regis High School in Cedar Rapids and went on to attend Waldorf Junior College for 2 years. He then attended and played football and baseball for the University of Dubuque, where he received a bachelor’s degree. Keith was united in marriage to Janell Carew on October 3, 1987, in Dubuque, Iowa. To this union, one son, Andy, was born. They later divorced. Keith worked many years in IT and Data Processing. He worked a second job at Short Stop in Marion, and for the last five years, he was a truck driver for BCI Lumber Company in North Liberty. Keith was an avid sports fan. He enjoyed playing softball in Cedar Rapids and watching the Iowa Hawkeyes. Most of all, he loved spending time with his family, especially his granddaughter, Addi. Keith will be greatly missed by all who knew and loved him. Keith is survived by his wife, Erin; his son, Andy (Tylar) Schlichte of Riverside, Iowa; granddaughter, Addison “Addi” Schlichte; mother, Carol Schlichte (Curt Burgin) of Marion; father, Marv (Mary) Schlichte of Cedar Rapids; two sisters, Karla (Eric Morse) Schlichte-Morse of Carmel, Indiana and Lisa (Barry) Haire of Papillion, Nebraska; and four nieces and nephews, Olivia and Aidan Morse, Kelsy (Brandon) Gaede, and Brittany Haire. He was preceded in death by his maternal and paternal grandparents. Memorials in Keith’s memory may be directed to Unity Point Hospice of St. Luke’s Hospital at 290 Blairs Ferry Road NE #100, in Cedar Rapids, Iowa, 52402.

The family of Keith Michael Schlichte created this Life Tributes page to make it easy to share your memories.

Send flowers to the Schlichte family.