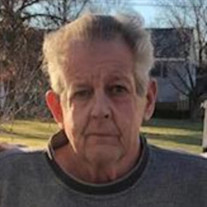 Ken Fagle, 74, of Center Point, Iowa, died Monday, February 1, 2021. A Celebration of Life with inurnment at Center Point Cemetery will take place at a later date. Murdoch Funeral Home & Cremation Service in Center Point is assisting the family. Ken was born on June 25, 1946, in Cedar Rapids, Iowa, the son of Wesley and Viola (Ondler) Fagle. In 1964, he graduated from Center Point High School. Ken was united in marriage to Jeanna Beth Andrews on June 12, 1965, in Center Point. He was a skilled carpenter all of his life. Ken owned Fagle Construction for many years and was a carpenter for the Cedar Rapids School District until his retirement. He was dedicated to his work, but knew how to enjoy life in his own way. He lived by the motto, “Do what your heart desires.” Ken enjoyed gardening, golfing, and spending time with friends. He was a retired volunteer firefighter for the Center Point Fire Department. Ken will be deeply missed, but he lives on as an organ and tissue donor. Survivors include his children, J.D. Fagle of Center Point and Heidi (Matt) Heilskov of Ankeny, Iowa; grandchildren, Karma and Christian Fagle, and Brandon and Riley Heilskov; and brother, Kevin Fagle. He was preceded in death by his parents, Wesley and Viola Fagle; wife, Jeanna Fagle in 2014; sister, Ginny Ramsey; brother-in-law, Jim Ramsey; and sister-in-law, Bonnie Fagle. The family would like to extend a special thank-you to the Center Point Ambulance Service, St. Luke’s Intensive Care Unit, and Select Specialty Hospital for their loving care of Ken.

The family of Ken Fagle created this Life Tributes page to make it easy to share your memories.

Send flowers to the Fagle family.