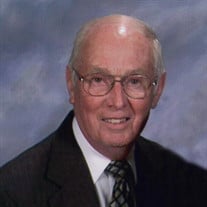 Kenneth D. Thompson, 87, of Lisbon, Iowa, son of Dewey and Estella (Fox) Thompson, was born on January 17, 1934, on a farm north of Arlington, Iowa. He passed away at St. Luke’s Hospital on May 3, 2021. Ken attended country schools until seventh grade when his parents moved to Oelwein, Iowa, graduating from Oelwein High School in 1952. He loved music and sang in several gospel quartets and was privileged to be chosen to sing in the Allstate Chorus in 1951. He spent two years with the 9th Engineer Battalion of the United States Army in Germany. When he returned home he and his brother, Keith, managed Schiff Shoes in Oelwein and Waterloo. This is when Ken met his wife, Careece Couchman of Seymour, Iowa, who was attending and then graduated from the University of Northern Iowa. They were married on June 29, 1968 in Promise City, Iowa. Later he was employed with Gage Food Products Company, a Chicago-based firm, where he spent the next 25 years, retiring in 1990. He was a member of Antioch Christian Church, Marion, Iowa, and served as an elder for 31 years. He is survived by his wife, Careece, of Lisbon, Iowa, and the following brothers-in-law and sisters-in-law, Janene Thompson of Cedar Rapids, Iowa, Don Pettit of Marietta, Georgia, Cheryl (Dennis) Housh of Seymour, Iowa, and Merrell (Michelle) Couchman of Hudson, Iowa, and many nieces and nephews. Kenneth was preceded in death by his parents; his sisters, and their husbands, Genevieve (Leslie) Seedorff of Independence, Missouri, and Mary (Paul) Hunt of Des Moines, Iowa; his brother, Keith of Cedar Rapids, Iowa; and sister-in-law, Janice Pettit of Marietta, Georgia. Celebration of Life service will be held at 4 p.m. on Sunday, May 9, 2021, at Antioch Christian Church in Marion, Iowa, conducted by Pastor Greg Johnson. The family will greet friends before the service on Sunday from 2:30 – 4:00 p.m. at the church. In lieu of flowers, memorials may be made to Antioch Christian Church, Marion, Iowa.

The family of Kenneth "Ken" D. Thompson created this Life Tributes page to make it easy to share your memories.