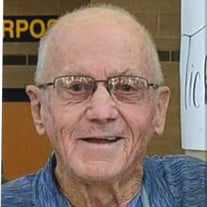 Kenneth Eugene “Mooney” Warren, 82, of Iowa City, Iowa, formerly of Marion, Iowa, passed away on Saturday, January 29, 2022, at his home following a lengthy illness. A military graveside service will be held at 2 p.m. on Saturday, June 25th, 2022, at Lisbon Cemetery in Lisbon, Iowa. Murdoch Funeral Home & Cremation Service of Marion is assisting the family. Kenneth (Ken) was born on October 28th, 1939, in Tallahassee, Florida, the son of James Franklin and Gertrude Ann (Stabler) Warren. He was a 1957 graduate of Gadsden County High School in Quincy, Florida and went on to serve honorably in the United States Air Force Security Service Group, from 1958 to 1966. He spent most of those years deployed in Japan, Pakistan, and Scotland. Ken was united in marriage to Ruth Marie Ford on March 19th, 1983, in Marion, Iowa. He was a member of Marion Christian Church and the Marion American Legion Post #298. Ken worked for the Marion Post Office, retiring after 28 years. Ken spent the first half of his retirement in Tampa, Florida playing golf, working at Tampa Palms Golf Course and enjoying time with his uncle, aunt and cousins. He spent the second half of his retirement back in Iowa spending time with his grandchildren, watching them grow and cheering them on in their various activities. Ken enjoyed playing and watching many sports, following the Iowa State Cyclones, collecting, golfing, fishing, and was an avid bowler. Ken is survived and lovingly remembered by his two sons, Jason (Beth) Warren of Iowa City, and Mark Warren (Jessica) of Altoona; step-children Gary (Shari) Wendel of Cedar Rapids, Dianne Feld of Cedar Rapids and Linda (Dan) Kuchenbaker of Peachtree City, Georgia; 13 grandchildren, Christian, Jonah, Kellen, Quinn, Kaitlyn, Avery, Dustin (Emilie), Alex, Derik, Garrit, Brian, Laura, and Ben; former spouse Marvel Van Note; one brother, James (Lee) Warren of Brooking, Oregon; several great grandchildren; many nieces, nephews, and cousins and his extended family, Jim and Teresa Hillsman of Fort Myers, Florida, and Jim and Linda Hickey of Mt. Vernon, Iowa. He was preceded in death by his parents, James and Gertrude Warren; wife, Ruth Warren; brother, Richard Warren; and sisters, Barbara Holland and Patricia Martin. Special thanks to his caring and compassionate doctors and nurses at the University of Iowa Hospital. Memorials in Ken’s memory may be made to the Fisher House Foundation for military and veteran’s families.

Kenneth Eugene &#8220;Mooney&#8221; Warren, 82, of Iowa City, Iowa, formerly of Marion, Iowa, passed away on Saturday, January 29, 2022, at his home following a lengthy illness. A military graveside service will be held at 2 p.m. on Saturday,... View Obituary & Service Information

The family of Kenneth Eugene Warren created this Life Tributes page to make it easy to share your memories.