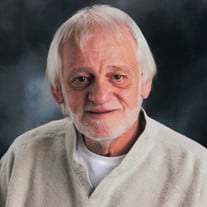 Larry Lee Balvin, 73, of Cedar Rapids, Iowa, died Monday, November 29, 2021, at his home. A Celebration of Life will take place from 2 – 4 p.m. on Saturday, December 4, 2021, at Murdoch-Linwood Funeral Home & Cremation Service in Cedar Rapids. Larry was born October 6, 1948, in Iowa, the son of Benjamin and Delores (Wiltgen) Balvin. After his mother died at a young age he was raised by his aunt and uncle, Wilson and Albina Masker. Larry graduated from Jefferson High School. He was united in marriage to Jean Johnson on August 11, 2007, in Cedar Rapids. Larry worked for Farmstead and Centro Inc. before his retirement in 2018. He was an Iowa State Cyclone fan. Larry enjoyed trips to Tama and Meskwaki casinos. Above all else, he cherished his time spent with family. Survivors include his wife, Jean Balvin of Cedar Rapids; daughters, Shelley (Tom) Breen of Bettendorf, Iowa, and Rebecca (Jason) Shields of Ft. Collins, Colorado; grandchildren, Regan, Wade, James, Mason, Walker, and Calloway; stepson, Mike (Christine) Mastin; and cats, Lexi and Suzi. He was preceded in death by his parents, Benjamin and Delores Balvin; aunt and uncle, Wilson and Albina Masker; and brothers, Steve and Jerry Balvin. Memorials may be directed to the family.

The family of Larry Lee Balvin created this Life Tributes page to make it easy to share your memories.

Send flowers to the Balvin family.