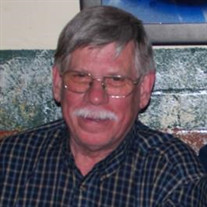 Larry Garrett “Hallsey” Hall, 79, of Cedar Rapids, Iowa, died Wednesday, December 23, 2020. A visitation will be held from 4 -7 p.m. on Wednesday, December 30, 2020, at Murdoch-Linwood Funeral Home & Cremation Service in Cedar Rapids. Burial will be held at a later date at Sixteen Cemetery in rural Thornburg, Iowa. All guests are respectfully requested to wear a mask and practice social distancing. Larry was born on July 19, 1941, at the family farmhouse near Wellman, Iowa, the son of Clarence and Margaret (Manley) Hall. He graduated from What Cheer High School. He was united in marriage to Shirley Morrow on January 28, 1961; the couple later divorced. Larry was united in marriage to Pat Stastny-Scheetz on May 29, 1983, at the Little Brown Church in Nashua, Iowa. He worked as a supervisor at Amana Refrigeration for over 40 years until his retirement in 2002. He served as the fire chief for the Amana Fire Brigade and the Deep River Fire Department. Larry enjoyed fishing and hunting, trips to Canada, bowling, and golfing. He loved to ride his Harley. Larry did carpentry work and was a handyman around the house. He loved sports and was a fan of the Iowa Hawkeyes and Green Bay Packers. He also loved music and dancing; Larry and Pat would turn heads on the dance floor – they were so good! Larry enjoyed going to his grandkids sporting events. Most of all, Larry loved spending time with Pat, his dogs, and his family. Survivors include his wife, Pat Hall of Cedar Rapids; children, Jolene (Rick) Wiseman of Fairfax, Iowa, Kim (Eric) Pruitt of Denver, Colorado, Tim (Lynn) Scheetz of Winterset, Iowa, and Mindy Washburn (Dustin Coufal) of Marion, Iowa; 13 grandchildren, Shane, Devra, Karena, Erica, Sonya, Ryan, Tristen, Tanner, Hunter, Alexi, Mason, Shayden, and Brantley; six great-grandchildren; sister, Joanne Aller of Belle Plaine, Iowa; sister-in-law, Esther Hall of Florida; and his dog, Millie. He was preceded in death by his parents; infant son, Brice Allen Hall; sister, Judy (Jerry) Wolvers; brother, Manley Hall; brother-in-law, Don Aller; and his beloved dogs, Fanny and Rocky. The family would like to extend a special thank you to Paula, Leora, and the rest of the staff at Mercy Hallmar for their wonderful loving care of Larry.

The family of Larry Garrett 'Hallsey' Hall created this Life Tributes page to make it easy to share your memories.

Send flowers to the Hall family.