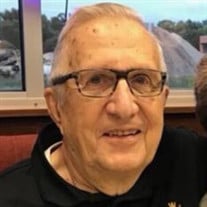 Just days after his 88th birthday, Larry K. Swanson passed from this life on Sunday, May 15, 2022. He was born May 9, 1934, in the small town of Rudd, Iowa, to Vance and Luella Swanson, who preceded him in death. Larry was the older brother to Joan Cerney, Sharon Wyborney and Karen Krambeer. Throughout his life he practiced a strong work ethic, first working on the family farm and then at the local grain elevator. Later he was employed by Nash Finch as a manager at Warehouse Market and SunMart, retiring after 29 years. During that time Larry and his family lived in Mason City and Muscatine, before settling in Cedar Rapids. Larry met Kathryn Ashland at the famous Surf Ballroom in Clear Lake, Iowa. They were married on October 16, 1960, and raised four children together: Dave, Kris, Jim and Lee. Larry was a member of the US Army and served in the Korean War. As a veteran, he proudly participated in a 2016 Honor Flight to Washington DC. Larry loved attending his grandchildren’s sports and school events, and never missed an opportunity to brag about their accomplishments. After retirement, Larry spent his time working on his yard and in his garden, growing vegetables, and trying to get a ‘word in edgewise’ at home. He was a dedicated Hawkeye fan and rarely missed watching a University of Iowa football or basketball game. In his earlier years he enjoyed deer hunting and trap shooting. Surviving family includes wife, Kathryn of 62 years; children, Dave (Sandi) Swanson, Kris (Tom) McDermott, Jim (Brenda) Swanson and Lee (Stacy) Swanson; grandchildren, Cade, Mallory, Kelby, Alyssa, Clare, Cael, Brynn and Easton; step-granddaughter, Tiffany (Brian) Jergenson; and great step-grandchildren, Gwenyth and Camden. Also surviving are his sisters, and several brother and sister-in-laws. Funeral Service will be held at 4 p.m. on Wednesday, May 18, 2022, at Murdoch-Linwood Funeral Home & Cremation Service, Cedar Rapids. Pastor Brody Tubaugh will officiate. Visitation will immediately follow the service at the funeral home from 5 – 7 p.m. Wednesday. Please dress casually, or honor Larry’s love of the Hawkeyes by wearing Hawkeye gear. In lieu of flowers, please direct memorials to the Eastern Iowa Honor Flight (eihonorflight.org), or to the family.

Just days after his 88th birthday, Larry K. Swanson passed from this life on Sunday, May 15, 2022. He was born May 9, 1934, in the small town of Rudd, Iowa, to Vance and Luella Swanson, who preceded him in death. Larry was the older brother... View Obituary & Service Information

The family of Larry K. Swanson created this Life Tributes page to make it easy to share your memories.

Send flowers to the Swanson family.