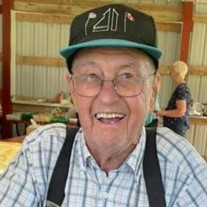 Lavern T. Greve, 90, of Central City, Iowa, passed away on Monday, September 27, 2021, at Unity Point Hospice of St. Luke’s. A private family inurnment will take place at a later date at Mt. Clark Cemetery in Central City. Murdoch Funeral Home & Cremation Service of Central City, is assisting the family. Lavern was born on January 21, 1931, in Luxemburg, Iowa, the son of Joseph and Anna (Jaeger) Greve. He served honorably in the United States Marine Corps during the Korean Conflict, from 1952 to 1954. Lavern was united in marriage to Betty L. Reinhardt on September 23, 1955, in Guttenburg, Iowa. He worked for Wilson Packing Plant until its’ closing. Lavern bought his farm by Central City in 1968. He loved anything to do with farming. Lavern was a member of St. Stephens Catholic Church. He enjoyed nature watching and Busch Lite. Lavern will be greatly missed by all who knew and loved him. Lavern is survived and lovingly remembered by his wife of 66 years, Betty Greve of Central City; daughter, Linda (Tracy) Klein; two sons, Jerald Greve of Colfax, Iowa, and Thomas Greve of Marshalltown, Iowa; five grandchildren; seven great-grandchildren; one brother, Charles (Judy) Greve of Holy Cross, Iowa; and four sisters, Rose Knockel of Dubuque, Iowa, Anna Reinhardt of Guttenburg, Sharon (Bill) Boge of Dubuque, and Ileen Powell of Cedar Rapids. He was preceded in death by his parents, Joseph and Anna Greve; one sister, Mardell Meisner; and four brothers, Elmer Greve, Junior Greve, Edward Greve, and Robert Greve. On January 21, please take a moment to look at the sky, pop the top on your favorite beverage, and toast Lavern’s memory.

The family of Lavern T. Greve created this Life Tributes page to make it easy to share your memories.

Send flowers to the Greve family.