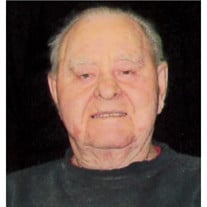 LaVerne Ganoe, 92, of Anamosa, Iowa, formerly of Central City, Iowa, passed away on Thursday, December 24, 2020, at Pinicon Place in Anamosa, Iowa. A family visitation will be held from 1 – 2 p.m. on Tuesday, December 29, 2020, at Murdoch Funeral Home & Cremation Service in Marion, Iowa. Burial will follow at Mt. Clark Cemetery, Central City. All guests are respectfully requested to wear a face mask and practice social distancing. LaVerne was born on February 29, 1928, in rural Jefferson, Iowa, one of six children to William and Madeline (Derry) Ganoe. On June 1, 1952, in Alburnett, Iowa, he was united in marriage to Doris Jeanne McAtee. To this union, four children were born. LaVerne worked for many years at the Alburnett Farmers Elevator and also was a dairy farmer in the Central City area for most of his life. He was a member of the First United Methodist Church and the GR Club, both in Central City. LaVerne will be greatly missed by all who knew and loved him. He is survived and lovingly remembered by his children, Michael (Mary Sue) Ganoe of Olathe, Kansas, Jacqueline (Ron) Beatty of Central City and Bill Ganoe of Cedar Rapids; daughter-in-law, Marie Ganoe of Waubeek; seven grandchildren; four step-grandchildren; seven great-grandchildren; and his three sisters and two brothers. LaVerne was preceded in death by his parents; beloved wife of 67 years, Doris Ganoe; and son, Charles Ganoe.

The family of LaVerne Ganoe created this Life Tributes page to make it easy to share your memories.

Send flowers to the Ganoe family.