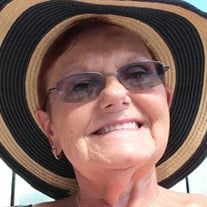 Leann Sue Diefenderfer Leann passed away on February 3, 2022, of natural causes at her home in Cedar Rapids, Iowa. Born in 1954 to Cecil and Ruth Keck in Circleville, Ohio, Leann grew up surrounded in the nature of the Hocking Hills State Park with her two brothers, Randy and Kevin. She met the love of her life Keith in 1973 while attending college. The two were married shortly after and were blessed with a wonderful marriage of 48 years. After marriage they began their life in Cedar Rapids, Iowa working for Collins Radio. Shortly thereafter she was blessed with a son, Chad and a daughter, Holly. While living in Salt Lake City, Utah during the 1980s she enjoyed the outdoors and Sunday picnics around isolated lakes in the mountains. Leann had a passion for travelling, caring for family, delighted in gardening, and enjoyed spending time on the beach with her best friends in the world, Ava and Ernie. She was blessed with five grandchildren, Ashlynn, Vivien, Kaelynn, Henry, and Elleanor. With the birth of Ashlynn, Leann’s new name lovingly became Meema. Her world centered around her grandbabies, and she relished any opportunity to babysit them with their Papa. Leann is survived by husband, Keith Diefenderfer; son, Chad (Mehgan) Diefenderfer; daughter, Holly (Jed) Cote; brothers, Randall Keck and Kevin Keck; along with her beloved grandchildren. She is preceded in death by her parents; and a granddaughter, Grace Dandelion. Visitation will be at Murdoch Funeral Home & Cremation Service, 3855 Katz Drive, Marion, Iowa on Tuesday, February 8, 2022, from 4 to 7 p.m. An inurnment service with family will occur after. In lieu of flowers, please support the University of Iowa Stead Family Children’s Hospital in Leann’s name. Our mother, Meema, and friend, and the devoted and loving wife of Keith, lives on in the hearts and minds of family and friends.

Leann Sue Diefenderfer Leann passed away on February 3, 2022, of natural causes at her home in Cedar Rapids, Iowa. Born in 1954 to Cecil and Ruth Keck in Circleville, Ohio, Leann grew up surrounded in the nature of the Hocking Hills State Park... View Obituary & Service Information

The family of Leann Sue Diefenderfer created this Life Tributes page to make it easy to share your memories.

Send flowers to the Diefenderfer family.