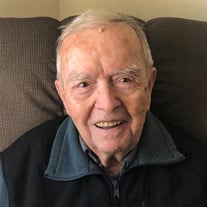 Leland (Lee) Lawrence Schoon, 99, of Marion, Iowa, died Wednesday, February 16, 2022, at the Dennis & Donna Oldorf Hospice House of Mercy in Hiawatha, Iowa. Services will be held at 10:30 a.m. on Monday, February 21, 2022, at Viola United Methodist Church in Viola, Iowa, with a visitation one hour prior to service. All guests are respectfully requested to wear a face mask and practice social distancing. Burial will follow at Wilcox Cemetery in Viola. Murdoch Funeral Home & Cremation Service of Marion, Iowa, is assisting the family. Lee was born January 10, 1923, in rural Jones County Iowa, the son of Lawrence and Johanna Schoon. He was the 6th child and 1st boy in his family of 12 children. Lee’s father was very happy to have his first son. He attended school in rural Jones County. Lee was raised during the depression in a large family and shared many stories of those early years. He grew up in a full house of siblings, sometimes in-laws and even nieces and nephews. Lee honorably served in the United States Army Air Forces from 1942 to 1944. He married Donna Armstrong on June 22, 1947, at the Viola United Methodist Church (3 months after their first date)! They were blessed with three daughters (even though dad was hoping for a son). As those daughters grew and married, he received the gift of three “son”-in-laws. Donna and Lee were members of Lutheran Church of the Resurrection in Marion for many years. Lee worked first as a farm hand while growing up. Next, he worked at Collins Radio in the early days of the company. When he and Donna were married, they began farming near Waubeek. In 1949, Donna and Lee moved to a farm near Springville. In 1965, Lee was offered a position in the Linn County Sheriff’s Office by Sheriff Walter Grant. Lee made the decision to move from farm life to being a Deputy Sheriff. He met new friends and experienced many adventures during his years as a deputy. Lee retired as a Lieutenant with the Sheriff’s Office. In retirement, Lee returned to his love of farming on an acreage near Marion. Lee always worked to keep a perfect yard, garden, and farm. He enjoyed outdoor work and loved having Donna by his side in whatever job he tackled. Dancing was something that Lee and Donna enjoyed from the night they met through their later years. Many a night was spent enjoying Dave Dighton or other local bands at various venues, most often PrairieMoon Ballroom. They also enjoyed many years wintering in Mission, Texas with friends. Lee enjoyed the daily newspaper. He read it front to back and completed the daily crossword. Lee’s great love in life was his wife of 72 years, Donna. Lee is survived by his three daughters, Sandra (Jack) Kuhn of Ramsey, Minnesota, Linda (Paul) Henze of Marion, and Pamela (Bob Andrlik) Hackbarth of Cedar Rapids; 10 grandchildren; 16 great-grandchildren; brother Neil (Pat) Schoon of Anamosa; two sisters, Nelda Mead of Center Junction and Evelyn Paulsen of Monticello; three sisters-in-law, Carol (Paul) Clark of Dubuque, Dorothy Shaffer of Monticello, and Mary Eilers of Anamosa; and brother-in-law, George (Pat) Armstrong of Marion. Lee was preceded in death by his wife, Donna; parents; Donna’s parents; his sisters, Ella Helm, Ida (Charles) Bauserman, Wilma Schoon, Mildred (George) Chposky, and Pauline (Merle) Husmann; brothers, Harlan (Shirley) Schoon, Marvin (Cherol) Schoon, and Galen Schoon; brothers-in-law, Paul Ernie Paulsen, Dillon Mead, Dale (Violet) Armstrong, and Leon Shaffer; sister-in-law, Shirley (Ernest) Clarke; and his son-in-law, Tom Hackbarth. Our family is grateful for the care given to Lee by the staff at The Views in Marion and the staff at the Dennis and Donna Oldorf Hospice House in Hiawatha. Your gentle kindness will always be remembered. Cards and memorials in Lee’s memory may be sent to Linda Henze at 2865 Highland Drive, Marion, IA 52302. Memorial funds will then be donated to Wilcox Cemetery, Viola, Iowa.

The family of Leland "Lee" Lawrence Schoon created this Life Tributes page to make it easy to share your memories.

Send flowers to the Schoon family.