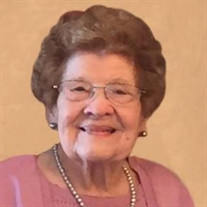 Lenore Alexander, 101, passed away peacefully with her family by her side on Saturday, February 19, 2022, at the Rehabilitation Center of Lisbon. A private burial took place at Oak Shade Cemetery in Marion, Iowa. A Celebration of Life is being planned for a later date. Lenore was born February 5, 1921, the daughter of LeRoy and Gladys (Joyce) Layer. She was a 1939 graduate of Marion High School. On April 5, 1942, Lenore was united in marriage to Richard Alexander, also from Marion. She had a variety of jobs during her lifetime, but the ones Lenore treasured most were with children. Lenore was a life-long member of the First Baptist Church in Marion, where she was active in their women’s groups, as a Sunday School teacher, and caring for infants and toddlers in their nursery. When her own children were grown, Lenore became a foster mom for newborns awaiting adoption, and also provided day care for children with single mothers. Later, she worked at a day care center caring for infants and toddlers. Lenore was known for her quick wit and ready smile. She was an excellent cook and specialized in pies for every occasion. She loved to travel with her husband, play cards, and do crossword puzzles. Lenore was a talented writer and devoted member of a senior writers’ group, producing many amusing anecdotes about her various adventures with aging, such as applying for Medicare, learning to drive at age 50, and sitting down to her first computer. She was funny, kind, and loving and will be greatly missed. Lenore is survived and lovingly remembered by her three daughters, Sharon (Robert) Hajny of Walnut Creek, California, Janet (Louise Hagen) Alexander of Decorah, Iowa, and Susan (Scott Peterson) Alexander of Mt. Vernon, Iowa. She treasured six grandchildren, Kristin (Lior Zadok) Hajny, Derek (Megan) Hajny, Liam (Cerrisa Snethen-Murphy) Murphy, Conor (Elsa McCarger) Murphy, Evan (Jena White) Peterson, and Tobyn Peterson; and six great-grandchildren, Maya Hajny Fernandez, Addy Peterson, Patrick Peterson, Jack Murphy, Lucy Hajny, and Flynn Murphy, and two step great-grandchildren, Orie Zadok and Ahmi Zadok; as well as extended family from coast to coast. Lenore was preceded in death by her parents, LeRoy and Gladys Layer; husband, Richard Alexander; and two sisters, Marian Bangle and Margaret Gonzalez. A special thank you to the caring staff at Bickford Cottage and Rehabilitation Center of Lisbon. Lenore’s family is grateful for the kindness and compassion shown to her during her years there. In lieu of flowers, memorials in Lenore’s name may be directed to: The Sondra and Lowell Parman Infant and Toddler Day Care Scholarship fund, at the First Baptist Church, 1260 29th Street, Marion, Iowa, 52302. Or you may contribute to help Lenore’s grandson as he deals with cancer treatment by directing memorials to: Murdoch Funeral Home, Attn.: Janet Alexander, 3855 Katz Drive, Marion, Iowa, 52302.

Lenore Alexander, 101, passed away peacefully with her family by her side on Saturday, February 19, 2022, at the Rehabilitation Center of Lisbon. A private burial took place at Oak Shade Cemetery in Marion, Iowa. A Celebration of Life is being... View Obituary & Service Information

The family of Lenore Alexander created this Life Tributes page to make it easy to share your memories.

Lenore Alexander, 101, passed away peacefully with her family...

Send flowers to the Alexander family.