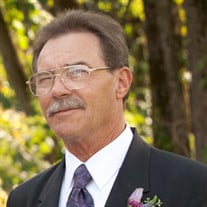 Leonard "Lenny" Alvin Kamberling, 72, passed away on February 1, 2022, from complications stemming from his battle with Frontal Temporal Lobe Dementia. A memorial service will be held at a later date. Lenny is survived by his wife, Jayne Kamberling, his mother, Lois Kamberling, his brother Chuck (Kathy) Kamberling, sister Susan (Doug) Gray, daughter Brook Harrington, stepchildren Kristin Hardy (Gerry Ambrose) and Adam (Deb) Hardy, grandchildren Kayla (Jerad) Ruth and Jackson Hardy and great grandchildren Finn Ruth, Beatrice Ruth and Henry Ruth. He is preceded in death by his father, Leonard Kamberling and grandparents John Zalesky, Emma Zalesky, Alvin Kamberling and Eva Kamberling. Lenny was born on May 11, 1949 in Cedar Rapids, Iowa to Lois Anne Kamberling and Leonard Melvin Kamberling. He grew up in Cedar Rapids and graduated from Washington High school in 1967. He married Teri Stephens and welcomed their daughter Michael Brook Kamberling in 1970. They later divorced. Lenny met Jayne Denise Hardy in May 1977 and after 23 years together, they married on November 10, 2000 at their home. He had his own painting business for over 30 years. Lenny loved music. He started out in a band in high school and was in three bands after that. The last band was Wild Oats. He strummed on his guitar up until the day before he died. He also loved being outdoors. His favorite activities were hunting for morel mushrooms and deer, metal detecting, coin collecting, and fishing. He spent many summers on Lake McBride with family and friends. In lieu of flowers, the family is requesting memorials to be made to the Family Caregiver's Center at 701 10th Street SE, Cedar Rapids, IA 52403 or online here. (Link to: https://www.mercycare.org/giving/donate-now/) Cards and condolences can be mailed to 2600 Meadowbrook Dr SE, Cedar Rapids, IA 52403.

Leonard "Lenny" Alvin Kamberling, 72, passed away on February 1, 2022, from complications stemming from his battle with Frontal Temporal Lobe Dementia. A memorial service will be held at a later date. Lenny is survived by his wife, Jayne Kamberling,... View Obituary & Service Information

The family of Leonard ‘Lenny’ Alvin Kamberling created this Life Tributes page to make it easy to share your memories.

Send flowers to the Kamberling family.