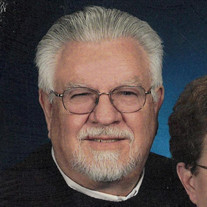 Lester Peter “Pete” Jurgens, 80, of Marion, Iowa, formerly of Van Horne, Iowa, passed away at the University of Iowa Hospitals and Clinics and joined our Lord in Heaven on Sunday, January 24, 2021. The family will greet friends from 4:00 to 7:00 p.m. on Thursday, January 28, 2021, at Murdoch Funeral Home & Cremation Service in Marion. Funeral Services will be held at 10:00 a.m. on Friday, January 29, 2021, at St. Paul’s Lutheran Church at 915 27th Street in Marion. Burial will follow at Linwood Cemetery in Cedar Rapids, Iowa. All guests are respectfully requested to wear a face mask and practice social distancing. Pete was born on January 9, 1941, in Atkins, Iowa, the son of Arthur and Irene (Gefaller) Jurgens. He graduated from Van Horne Consolidate School in 1959. Pete served honorably in the United States Air Force from 1960 to 1964, during the Vietnam War. On August 18, 1962, Pete was united in marriage to Sharon Kay Steinford. He worked for Rockwell Collins for 34 years, retiring in 1990. Pete was a member of St. Paul’s Lutheran Church in Marion and the ACCA and Model A Club both of Cedar Rapids. He served on the Witwer Senior Center Board. Pete enjoyed volunteering for SHIIP / Advantage Program and Rockwell REACT. He received the Governor’s Volunteer Award along with several other awards from the State of Iowa. Pete also received the President’s Call to Service Award and Volunteer Service Award. He also enjoyed fishing, hunting, driving his ’65 Mustang, working with leather, woodworking, and traveling. After Pete and Sharon retired, they visited many states and countries, and went on several cruises with their car club friends. Pete will be greatly missed by all who knew and loved him. Pete is survived and lovingly remembered by his son, Richard Jurgens; daughter, Kristin (Don) Iehl; four grandchildren, Richard D. and Laura Jurgens and Ashley and David Iehl; sister, Linda (Larry) Hlas; brother, Darrell (Carol) Jurgens; and several nieces and nephews. He was preceded in death by his parents; and beloved wife of 55 years, Sharon Jurgens in 2017. In lieu of flowers, a memorial fund has been established in Pete’s memory. The family will designate at a later date.

Lester Peter &#8220;Pete&#8221; Jurgens, 80, of Marion, Iowa, formerly of Van Horne, Iowa, passed away at the University of Iowa Hospitals and Clinics and joined our Lord in Heaven on Sunday, January 24, 2021. The family will greet friends from... View Obituary & Service Information

The family of Lester Peter "Pete" Jurgens created this Life Tributes page to make it easy to share your memories.

Send flowers to the Jurgens family.