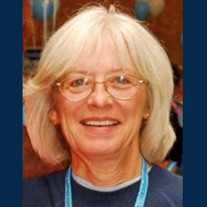 Linda Dvorak, 73, of Cedar Rapids, Iowa, died Thursday, April 7, 2022. A celebration of life will be held from 1 – 4 p.m. on Sunday, April 10, 2022, at the Knights of Columbus Hall, 1620 E Avenue NE, Cedar Rapids, 52401. Linda was born April 25, 1948, in Terrell, Texas, the daughter of Earl and Helen (Yuza) Hemminger. She graduated from Cedar Rapids Jefferson High School. Linda was united in marriage to Robert Fulton in April of 1967 and had three children; the couple later divorced. She married Randy Dvorak in October of 1982 and had one child. Linda worked for Cherry Burrell and later at Evergreen Packaging Group for 26 years until her retirement in 2002. She was a host family for the Cedar Rapids Kernels for many years. Linda was a huge animal lover, especially her cats – she always made sure all the animals were fed. She enjoyed spending time with her “six pack” friends. She cherished time spent with her grandchildren, friends (drinking margaritas), and family. Survivors include her children, Amy (Tim) Gustafson of Chicago, Illinois, Todd (Holly) Fulton of Richmond, Virginia, John (Kelly) Fulton and Theresa (Michael) Volk, all of Cedar Rapids; grandchildren, Nicolas, Brynn, Jacob and Justin Fulton, Marissa and Amber Gustafson, Lyla, Lucas and Lainey Volk, Mason and Lexi Bailey; and siblings, Susie Lockhart and Carol Unash. She was preceded in death by her parents; and siblings, Sally Janey, Tom and Dean Hemminger. Memorials may be directed to the family.

The family of Linda Dvorak created this Life Tributes page to make it easy to share your memories.

Send flowers to the Dvorak family.