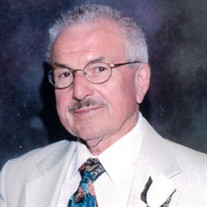 Lucian “Luke” John Lawrence, 93, of Central City, Iowa, passed away on Sunday, February 13, 2022, at Hallmark Care Center in Mt. Vernon, Iowa. Family will greet friends and family from 4:00 to 6:00 p.m. on Wednesday, February 16, 2022, at Murdoch Funeral Home & Cremation Service in Central City, Iowa. A Funeral Mass will be held at 10:30 a.m. on Thursday, February 17, 2022, at St. Stephen’s Catholic Church in Central City, with visitation one hour prior. Reverend Nick March will officiate. Burial will follow at St. Joseph’s Catholic Cemetery in Prairieburg, Iowa. All guests are respectfully requested to wear a face mask and practice social distancing. Luke was born on January 7, 1929, in Central City, the son of Jack and Julia (Lacek) Lawrence. He was a graduate of Coggon High School. On June 7, 1950, Luke was united in marriage to Lois Eileen Smith. They lived a short time in Cedar Rapids, Iowa, and eventually began farming in Prairieburg, later moving to Central City. Luke worked as a machinist for Collins Radio until retirement. He was an active member of St. Stephen’s Catholic Church in Central City. Luke enjoyed building Volkswagens and golfing. He and Lois enjoyed touring with the local MG Car Club and wintering in Texas. Luke will be greatly missed by all who knew and loved him. Luke is survived and lovingly remembered by his two children, Rick (Nancy) Lawrence of Cedar Rapids, and Lynn (Dean) Holeton of North English, Iowa; 13 grandchildren; many great-grandchildren; and many nieces, nephews, and cousins. Luke was preceded in death by his parents, Jack and Julia Lawrence; wife, Lois Lawrence in 2020; son, John; daughter-in-law, Jodie; and four sisters. In lieu of flowers, memorials in Luke’s memory may be made to the Alzheimer’s Association at 1730 28th Street in West Des Moines, Iowa, 50266.

The family of Lucian "Luke" John Lawrence created this Life Tributes page to make it easy to share your memories.

Send flowers to the Lawrence family.