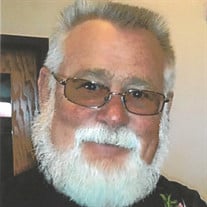 Lyle F. Kluesner, 68, of Manchester, Iowa, passed away on Wednesday, October 21, 2020, at Unity Point St. Luke’s Hospital. Visitation will be held from 4 to 7 p.m. Wednesday, October 28, 2020 at Bohnenkamp – Murdoch Funeral Home & Cremation Service, Manchester, additional visitation will be at the Funeral Home from 9:30 – 10:15 a.m. prior to Mass. Mass of Christian Burial will be held at 10:30 a.m. Thursday, October 29, 2020 at St. Mary Catholic Church, Manchester with burial to follow at Oakland Cemetery, Manchester. All guests are respectfully requested to wear a mask and practice social distancing. Lyle was born April 22, 1952 in Manchester, Iowa, the son of Edmund and Virginia (Gotto) Kluesner. He graduated from West Delaware High School. On April 19, 1975, Lyle married Gloria Billhorn at St. Mary’s Catholic Church, Manchester. Two sons were born to this union. He worked for the City of Manchester Street Department for 34 years until his retirement. He volunteered for the Manchester Fire Department for 17 years and was a member of the Delaware County Honor Guard. Lyle enjoyed early morning coffee at the Sunset Restaurant, solving the world’s problems or sitting out on the front lawn with his siblings watching the traffic as it goes by. Lyle was an avid Drag Race fan and could be found watching drag racing at Tri State Raceway in Earlville, where he worked for many years. Most of all he cherished the time that was spent with his children and grandchildren. He will be greatly missed by so many. He is survived by his wife of 45 years, Gloria; two sons, Justin Kluesner of Aberdeen, SD and Joel (Nicole) Kluesner of Dundee, IA; three grandchildren, Eva, Clay and Grace Kluesner; mother-in-law, Vonda Billhorn; siblings, Patrick (JoAnn) Kluesner, Elizabeth Kintzle, David Kluesner and Kathy (Dan) Hunt; sister-in-law, Alice Kluesner and numerous nieces and nephews. He was preceded in death by his parents, Edmund and Virginia Kluesner and a brother, Loras Kluesner. Please share a memory of Lyle at www.murdochfuneralhome.com under obituaries.

The family of Lyle Kluesner created this Life Tributes page to make it easy to share your memories.

Lyle F. Kluesner, 68, of Manchester, Iowa, passed away on Wednesday,...

Send flowers to the Kluesner family.