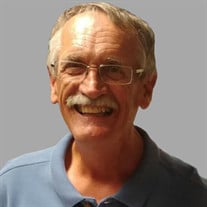 Mark was born on October 31, 1950, in Minneapolis, Minnesota, the son of Lloyd H. and Lillian (Holm) Lofquist. He graduated high school and went on to receive his associate of arts degree at the University of Minnesota. Mark served honorably in the United States Army during the Vietnam War, from 1971 to 1974. On September 18, 1981, he was united in marriage to Deborah Breznik in Afton, Minnesota. Mark always had a strong work ethic, which found him in a number of managerial positions. It wasn’t until many years later that he found his true calling. Mark became a minister within the Free Methodist Church, and he served as the head pastor for Toddville Free Methodist Church for several years. He very much enjoyed the personal connections that position brought. Mark loved being there for people at their worst and at their best. When he wasn’t at the pulpit he loved to travel, camp, and hike. His retirement brought him all those pleasures. Mark was able to travel the country in his R.V. with his beloved dog, Greta, by his side and take up short-term residence at R.V. parks throughout America. Mark will be missed by all who knew and loved him. Mark is survived by his three stepchildren, Nathan (Brandie) Hart of New Richmond, Wisconsin, Sarah Hart of Phoenix, Arizona, and Adam (Annie) Hart of Waconia, Minnesota; four grandchildren, Evan and Josie Hart of New Richmond, and Nora and Emmitt Hart of Waconia; his sister, Mary Yanchar of Lakeland Shores, Minnesota; two nephews and niece, Chris (Christine) Yanchar with their son Soren of Lake Elmo, Minnesota, Tony Yanchar of Missoula, Montana, and Terry Yanchar of Minneapolis, Minnesota. He was preceded in death by his parents; wife, Deborah Lofquist; brother-in-law, Jack Yanchar; and his dog, Greta. A private inurnment will be held at Dunkard Cemetery in Toddville, Iowa.

Mark was born on October 31, 1950, in Minneapolis, Minnesota, the son of Lloyd H. and Lillian (Holm) Lofquist. He graduated high school and went on to receive his associate of arts degree at the University of Minnesota. Mark served honorably... View Obituary & Service Information

The family of Mark Frederick Lofquist created this Life Tributes page to make it easy to share your memories.

Send flowers to the Lofquist family.