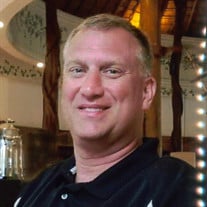 While vacationing in Punta Cana celebrating a milestone birthday and wedding anniversary, Mark Alan Miller, 50, of Marion, Iowa passed away unexpectedly on Thursday, May 6, 2021. The family will greet friends and family from 3 - 5:30 p.m. on Thursday, May 27, 2021 at Murdoch Funeral Home & Cremation Service in Marion, where a prayer service will begin at 5:30 p.m. with Deacon Scott Zogg officiating. A Celebration of Life will follow from 6 – 8 p.m. at the American Legion Hall Post #298 in Marion. Mark's greatest loves in life were his wife and kids with the Chicago Bears a close second. Mark loved pursuing new adventures with his family as much as he liked staying in for a night of card games and laughing. Mark was a jack of all trades (and excelled at everything enough to have a healthy ego about it). He enjoyed golf league at St. Andrew's with his friends and son Nick. He took pride in son Ben’s continued achievements in Jujitsu. Mark competed in conference style strategy war games with son Alex and his Uncle Terry. He also enjoyed working on his home and walking his daughter Jessica through her own home improvements. Mark also enjoyed playing basketball with his sons, figuring out escape rooms with his family, winning trivia, sharing meals and drinks with friends, biking, and spending time in the hot tub with his wife Kate. Mark easily made friends wherever he went and could spend hours talking to friends and family on the phone. He was a proud member of Local #81 Mechanical Heat and Frost Insulators working for Iowa-Illinois Taylor Insulation for 25 years. He served as a Marine Reservist in the 1990’s. Mark had a tendency to reply in movie quotes, song lyrics, or bad dad jokes. If we were worrying about something he would routinely say in a silly voice, "Shit always works out for Millers... yeeaaaoooww!" Another of his favorite adages was, "Time to make like a tree - and go." Mark will be loved and missed by all who met him and will be remembered as a giant, witty goofball. He is survived by his wife of 26 years, Katherine (Day) Miller of Marion, daughter Jessica Miller (Tyler Corbitt) of Atlanta, Georgia, sons Alex, Nick, and Benjamin Miller all of Marion, father Robert (Dawn) Miller of Davenport, mother Sue Fritz of Le Claire, Iowa, brother Rick (Stephanie) Stahl of Marion, sister Debi (Kenny) Larson of Park View, Iowa, uncle Terry (Jeanine) Miller of Des Moines, Iowa, and several cousins, nieces, and nephews. Mark was preceded in death by his grandparents and an uncle. In lieu of flowers, memorials in Mark’s memory may be directed to a Veteran’s organization of the donor’s choice.

While vacationing in Punta Cana celebrating a milestone birthday and wedding anniversary, Mark Alan Miller, 50, of Marion, Iowa passed away unexpectedly on Thursday, May 6, 2021. The family will greet friends and family from 3 - 5:30 p.m. on... View Obituary & Service Information

The family of Mark Alan Miller created this Life Tributes page to make it easy to share your memories.

While vacationing in Punta Cana celebrating a milestone birthday...