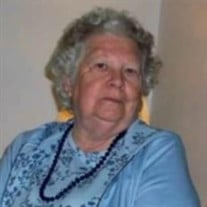 Marlene Rae Eichhorn, 88, formerly of Marion, Iowa, passed away July 29, 2021, at Living Center West in Cedar Rapids, Iowa. A visitation will be held from 4 – 7 p.m. on Monday, August 2, 2021, at The Legacy Center at Murdoch-Linwood, 520 Wilson Avenue SW, Cedar Rapids. A graveside service will take place at 10:00 a.m. on Tuesday, August 3, 2021, at the Wyoming Cemetery in Wyoming, Iowa. Marlene is survived by her brother, Gary (Connie) Benning; her sister-in-law, Luella Eichhorn; daughter, Diane (Greg) Loeffler; son, Brad (Terry) Eichhorn; son-in-law, Grant Fletcher; daughter, Lisa (Delaney) Sallee; daughter, Chris Eichhorn; and her “other” son, Tim Stephan. She was blessed with 12 grandchildren and five great-grandchildren. She was preceded in death by her parents, Myrtle and Charles Marshall and Velma and Raymond Benning; her husband, Howard Eichhorn; sister, Nancy Marshall-Hayes; sister, Donna Gerst; brother, Charles Marshall; and her daughter, Kathy (Grant) Eichhorn-Fletcher. Marlene was born on July 14, 1933, and she attended school in Wyoming, Iowa, where she graduated in 1950. She attended nursing school at St. Luke’s Hospital in Cedar Rapids and stayed on there as an OB nurse for many years. She was married to Howard J. Eichhorn on July 24, 1955, and they had five children. Marlene enjoyed spending time in the garden, cooking, visiting with friends and neighbors, doing word puzzles, and watching the Iowa men’s team play basketball. She was a religious fan of soap operas for decades. She spent many evenings chatting with her good friend, Cheryl, most often with one of her favorite shows, Everybody Loves Raymond or The Golden Girls playing in the background. Her family will miss her most around the holidays when making her party mix and sugar cookie recipes, which none of them can replicate perfectly. We would like to express thanks to all the healthcare workers who made a difference in Marlene’s life. Memorials in Marlene’s name may be made to the family to support her favorite organizations.

The family of Marlene Rae Eichhorn created this Life Tributes page to make it easy to share your memories.

Send flowers to the Eichhorn family.