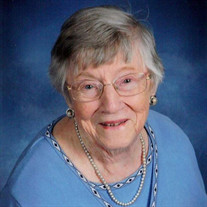 Mary Anderson Stearns, 94, of Cedar Rapids, Iowa died September 16, 2021, at the Woodlands. A memorial service will be held at 10:00 a.m. on Monday, June 6, 2022, at First Presbyterian Church in Marion, Iowa, with Pastor Julie Anderson-Schuett and Dr. Nancy Redman officiating. A luncheon will follow at the church. Murdoch Funeral Home & Cremation Service in Marion is assisting the family. She was born October 15, 1926, to Roy A. Anderson and Irma Dorgan Anderson in Davenport. Her parents were divorced in 1933 and later her father married Edna Bosworth. Mary spent her entire school days in Des Moines and graduated from Roosevelt High School in 1944. She was active in band and orchestra, and church activities. She fulfilled her dream to be a nurse and was in the Cadet Nurse Corps, graduating from Iowa Methodist Hospital in Des Moines in 1947. After attending Monmouth College for a year, she went to Assiut, Egypt under the auspice of the United Presbyterian Church and served as an instructor and cared for patients from 1948-1951 at the American Mission Hospital. After returning to the U.S., she married Ben W. Stearns, Jr. on June 13, 1953. They were married for 60 years. She is survived by three daughters, Jane Upmeyer of Indianapolis, Indiana, Gail Stearns of Orange, California, and Nancy Martin and husband Robert of Ankeny, Iowa; six grandchildren, Amy Smith and husband Josh, and Staci Laski and husband Jack both of Indianapolis, Indiana, John Moody of Los Angeles, California, Jeana Moody of Moscow, Idaho, Laura Martin of Birmingham, England, and Ian Martin of Los Angeles, California; and three great grandchildren, Meredith and Meyer Smith, and Margot Laski. Beginning married life in Iowa City, she and her husband were charter members of St Andrew Church. They lived in Marion 45 years before joining the Meth-Wick Community. At St. Lukes Hospital she worked for 18 years as an instructor in the School for Practical Nurses and worked in Nursing Service for six years. During her retirement she helped found and volunteered at the Community Health Free Clinic of Cedar Rapids. Her family was very active in First Presbyterian Church, Marion where she was an elder, sang in the choir, taught Sunday School and participated in women’s work. She was active in East Iowa Presbytery serving on various committees as well as a term as moderator of Presbytery. She was preceded in death by her husband; her parents; and brothers, Ronald Anderson, and Daniel Anderson. Memorials may be given to First Presbyterian Church of Marion, the Community Health Free Clinic of Cedar Rapids, or the charity of your choice.

The family of Mary Stearns created this Life Tributes page to make it easy to share your memories.