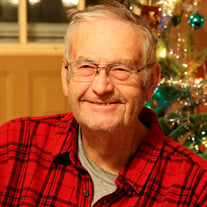 Max Betenbender, 73, of Coggon, Iowa, passed away peacefully in his sleep on Friday, September 20, 2019, at the Dennis & Donna Oldorf Hospice House of Mercy, Hiawatha, Iowa. Family will greet friends from 4 – 8 p.m. Wednesday, September 25, 2019, at Murdoch Funeral Home & Cremation Service, Marion, Iowa. A funeral service will be held at 2 p.m. Thursday, September 26, 2019, at the funeral home, officiated by Pastor Nathan Eddy, with visitation one hour prior to service. Burial will follow at Coggon Cemetery, Coggon, Iowa. Max was born May 31, 1946, in Manchester, Iowa, to Glen “Pete” and Blanche (Bliss) Betenbender. He graduated from Coggon High School. Max served honorably in United States Army during the Vietnam War, from 1965 to 1967. He was united in marriage to Donna Johnson on November 7, 1970, in Independence, Iowa, at Hope Wesleyan Church. Max was the president of Betenbender Manufacturing. He was a member of the Coggon American Legion Post #362 and the Antique Car Club. Max collected army vehicles, including two army tanks. He loved traveling. Max was a friend to all, always willing to help. He will be dearly missed by all who knew and loved him. Max is survived and lovingly remembered by his wife of 48 years, Donna Betenbender; daughter, Teresa Betenbender (Steve Cook); two grandchildren, Courtney (David) Blaber and Cameron Klouda; three great-grandchildren, Isabella, Gabriella and Stephen Blaber; and many nieces, nephews and cousins. He was preceded in death by his parents; son, Ted Betenbender; brother, Larry Betenbender; and baby Blaber. In lieu of flowers, memorials in Max’s memory may be directed to the family to be designated later.

The family of Max Betenbender created this Life Tributes page to make it easy to share your memories.

Send flowers to the Betenbender family.