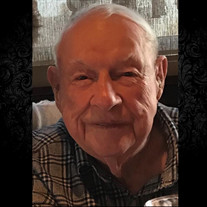 Former coach Melvin “Mel” Clarence Meggers, 98, of Marion, Iowa passed away on Sunday, January 30, 2022, at St. Luke’s Hospital in Cedar Rapids, Iowa. Family will greet friends and family from 4:00 to 7:00 p.m. on Friday, February 4, 2022, at Murdoch Funeral Home & Cremation Service in Marion. A funeral service will be held at 1:00 p.m. on Saturday, February 5, 2022, at Marion Methodist Church located at 5050 REC Drive in Marion, with Pastor Mike Morgan officiating. Burial with military honors will take place at 3:00 p.m. on Saturday, at Cedar Memorial Park Cemetery in Cedar Rapids. Mel was born on March 5, 1923, in Martelle, Iowa, the son of Clarence F. and Helen Jo (McConaughy) Meggers. The family moved to Marion when he was an infant. At 12 years of age, he began caddying for the Indian Creek Country Club, and when he was 18 years old, Mel received a scholarship for Cornell College in Mt. Vernon from Marion High School as a football quarterback. He was recruited in 1943 to flight school as a cadet for the United States Air Force, where he became a fighter pilot. After serving honorably in World War II, Mel completed his BA degree at Coe College. On July 26, 1945, Mel was united in marriage to Helen Jo Bordwell at the Buckley Field Air Force Base in Colorado Springs, Colorado. To this union, three children were born, Joanne, Kathy, and James. Helen passed away on September 26, 2000. He later met and married Bonnie Jane (Murray) McGranahan in Marion, on May 25, 2013. Mel was a long-time teacher and coach in the Marion Independent School District who impacted many student-athletes. He taught 5th grade at Lincoln School for one year. Mel then taught 5th grade at Starry Elementary for two years. In 1961, he started at Vernon Middle School where he taught Social Studies and History and also coached basketball, football, and track. Mel continued teaching and coaching at Vernon Middle School until he retired in 1985. During this time, he coached varsity football for two years and multiple sports at the middle school for 21 years. On September 29, 2017, Mel was inducted into the Marion High School Athletic Hall of Fame for his coaching. All of his 23 years as a coach at Marion resulted in winning seasons. Mel did a lot of work as a scout for Les Hipple for football and basketball. He also served as a bus driver for the games. Mel was a pioneer for helping bring the girls basketball program to Marion schools. He belonged to Indian Creek Country Club and was well recognized for his golfing success. Mel was also a member of the Marion American Legion Post #298 and Marion Methodist Church. Mel was known for his daily walks, often stopped by former students who told him he was their favorite teacher and mentor. He was known for his humor, discipline and yet kindness. Mel gave inspiration to many people and will be greatly missed by all who knew and loved him. Mel is survived by his wife, Bonnie McGranahan Meggers of Marion; three children, Joanne (Ron) Bailey of Franklin, Tennessee, Kathy (Tom) Davis of Marion, and James (Chris) Meggers of Marion; two stepchildren, Nancy (Charlie) Patrick of Cedar Rapids, and Charles (Patty) Spear of Seffner, Floirda; seven grandchildren; five step grandchildren; ten great-grandchildren; eight step great-grandchildren; and sister, Darlene Nash of Marion. He was preceded in death by his parents, Clarence and Helen Meggers; and his first wife, Helen Meggers. In lieu of flowers, memorials in Mel’s memory may be made to either St. Jude’s Children’s Hospital, National Multiple Sclerosis Society, or a favorite charity of the donor’s choice.

The family of Melvin "Mel" C. Meggers created this Life Tributes page to make it easy to share your memories.

Send flowers to the Meggers family.