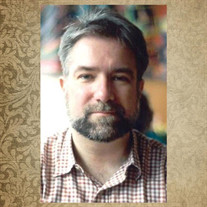 Michael David Fleming died peacefully in the bosom of his family 2 May 2021 in Cedar Rapids, Iowa. Mr. Fleming, a music and dance critic was a Renaissance man of letters, a scholar of the Baroque, and an incisive newspaperman and interviewer.... View Obituary & Service Information

The family of Michael David Fleming created this Life Tributes page to make it easy to share your memories.

Michael David Fleming died peacefully in the bosom of his family...

Send flowers to the Fleming family.