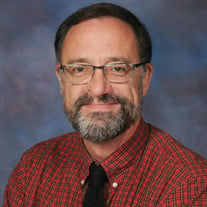 Michael A. Meshak, 57, of Marion, Iowa, passed away on Wednesday, May 18, 2022, at the University of Iowa Hospitals and Clinics in Iowa City, Iowa. Family will greet friends and family from 2:00 to 3:00 p.m. on Friday, June 10, 2022, at Peoples Church Unitarian Universalist at 4980 Gordon Avenue NW in Cedar Rapids, Iowa. A funeral service will follow at 3:00 p.m. on Friday at the church, conducted by Pastor David Wise. Murdoch Funeral Home & Cremation Service of Marion is assisting the family. Michael was born on May 9, 1965, in Stevens Point, Wisconsin, the son of Ralph and Mary Jane (Drefcinski) Meshak. He graduated from Stevens Point High School and went on to obtain bachelor’s Degrees, in Forestry and in Education, from the University of Wisconsin in Stevens Point. Michael then pursued a master’s degree in Education from Viterbo University in Lacrosse, Wisconsin. On June 29, 2002, he was united in marriage to Brenda L. Noaker. Michael was a Spanish teacher at Monticello High School for 20 years. He served in the Peace Corps twice, once in Guatemala and once in Ecuador. Michael was an active member of Peoples Church Unitarian Universalist in Cedar Rapids, where he served as a past Board President. He was an Eagle Scout, actively involved in Monticello Troop 66 and Marion Troop 35. Michael served on the Monticello Tree Board. He enjoyed doing tree projects and forestry. Michael will be greatly missed by all who knew and loved him. Michael is survived and lovingly remembered by his wife of nearly 20 years, Brenda Meshak of Marion; three siblings, Cynthia (Leon) Calhoun-Kosiec of Plover, Wisconsin, Patrick (Chrissy) Meshak of Hastings, Minnesota, and Melissa (Doug) Bulin of Reedsburg, Wisconsin; six nephews; and three nieces. He was preceded in death by his parents and grandparents. Memorials in Michael’s memory may be made to either the Peoples Church Unitarian Universalist in Cedar Rapids, or to BSA Tesomas Scout Camp at 5403 Spider Lake Road in Rhinelander, Wisconsin, 54051, or to Trees Forever at 80 W 8th Avenue in Marion, Iowa, 52302.

The family of Michael A. Meshak created this Life Tributes page to make it easy to share your memories.

Send flowers to the Meshak family.