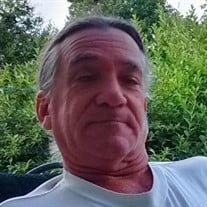 Michael “Mike” C. Walton, 60, of Cedar Rapids, Iowa, passed away on Thursday, March 18, 2021, at his home following a brief illness. In keeping with Mike’s wishes, funeral services will not be held. Murdoch-Linwood Funeral Home & Cremation Service in Cedar Rapids is assisting the family. Mike was born on July 1, 1960, the son of Albert and Kathryn Joan Walton. He attended Anamosa High School and relocated to Colorado where he was employed by Walton Construction and Seven States Steel as an iron worker. Returning to Iowa in 1990, he worked as a crane operator in Minnesota and Iowa and was employed by TriState Construction prior to retiring in 2015. Mike was a member of IUOE Local 234 in Des Moines. He greatly enjoyed his job operating cranes and was passionate about flying the American flag from the booms of the tower cranes on the job sites. Mike was a music lover and played the drums in his younger days. He enjoyed attending rock concerts - especially Bob Seger, The Eagles, Billy Joel, and Bruce Springsteen. He was also an avid fan of the Chicago Bears and the Chicago Cubs. Mike is survived by his sister and brother-in-law, Karla and Gary Phillips, Kennesaw, Georgia; his niece and nephew, Kate and Matt Phillips; his girlfriend, Janet Kula; his aunt, Velma Hanus; cousins, Greg Nelson, Len Dunham, and Lori Mercer; and his beloved cat, Sweetie. He was preceded in death by his parents; his brother, Alan Walton; and his sister-in-law, Kim Walton. Mike requested that his friends and family remember the good times they had and the laughs that were shared over the years. Memorials in Mike’s memory may be made to the Cedar Valley Humane Society.

The family of Michael 'Mike' C. Walton created this Life Tributes page to make it easy to share your memories.

Send flowers to the Walton family.