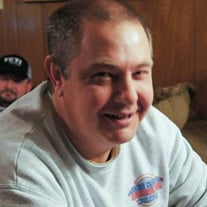 Mikeal “Mike” B. Loughren, 55, of Coggon, Iowa, passed away unexpectedly on Tuesday, October 6, 2020, at his home. The family will greet friends from 2 – 5 p.m. on Sunday, October 11, 2020, at Murdoch Funeral Home & Cremation Service, Central City. A Memorial Service will be held at 1 p.m. on Monday, October 12, 2020, at United Church of Christ in Central City conducted by Reverend Vicki Engelmann. All guests are respectfully requested to wear a face mask and practice social distancing. Inurnment will take place at Mt. Clark Cemetery in Central City at a later date. Mike was born November 22, 1964, in Cedar Rapids, Iowa, the son of John and Sally (Rudd) Loughren. He graduated from Central City High School in 1983. Mike started his working career at the Central City Grocery Store. He then was employed at Hunter Specialties in Cedar Rapids for many years as a maintenance supervisor. Mike was united in marriage to Darla E. Gilbertson in 1986, they later divorced. He then married Dawn Harford on November 2, 2001 in Bloomington, Minnesota. Mike was a member of the United Church of Christ in Central City. He was a racing enthusiast, and during his teen years he raced snowmobiles and won many trophies. Mike then had his own hobby stock car for many years. He helped start, manage, and ran the sound for the Lockren Band for eight years. Mike loved the outdoors, especially fishing and camping. He loved his family and kept in close touch with each of them. He had many friends and was the friend everyone could count on to be there for them. He is survived and lovingly remembered by his wife, Dawn Loughren of Coggon; two daughters, Amanda (Brett) Pomeroy of Marion and Heather (Lucas) Schlosser of Cedar Rapids; one stepson, Brenden (Tina) Sauer of Cedar Rapids; four grandchildren, Riley, Kenzie, Theo, and Mikeal; his father, John Loughren of Robins, Iowa; and his brother, Mark (Kelly) Loughren of Marion. Mike was preceded in death by his mother on May 5, 2016, and his grandparents. A memorial fund has been established in Mike’s memory.

The family of Mikeal 'Mike' B. Loughren created this Life Tributes page to make it easy to share your memories.

Mikeal “Mike” B. Loughren, 55, of Coggon, Iowa, passed away unexpectedly...

Send flowers to the Loughren family.