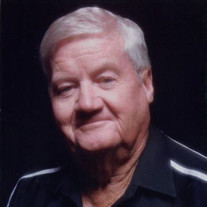 Milo “Pete” Wensil Cassidy, 90, of Cedar Rapids, Iowa, passed of natural causes on Sunday, September 5, 2021, at Garnett Place in Cedar Rapids. A Celebration of Pete’s Life will be held at a future date. Pete was born on January 30,1931, in Cedar Rapids, the son of Jess and Maude (Metzger) Cassidy. Pete was a devoted husband for 71 years to Kathryn Cassidy. Kathryn graduated from McKinley High School in January of 1950, and Pete married her, the love of his life, the next day. After the reception, they got on a train and went to Chicago for their honeymoon. She was 17, he was 18. Pete had a great personality, he could walk into a room and make friends easily. Pete was a 50 year plus member of the bricklayer’s union, having joined the union in 1948, and worked for Seedorf Masonry based in Strawberry Point for many years. Pete and Kathy owned and operated Van Horne Lanes for three years. They also owned C & C Masonry for ten years. Upon retirement, they moved to Arizona. In January 2020, they moved back to Iowa to spend their final years with family. In his era, Pete was highly regarded by his peers. He was a tough competitive team bowler, always bowling with the top teams in the toughest leagues and tournaments in the area. As tough and competitive as he was, his greatest attribute was his good sportsmanship and sense of fair play. His 1970, Van Horne Lanes bowling team won the Cedar Rapids City team championship. He was inducted into the Cedar Rapids Hall of fame in 1987. He also won the scratch all events for the city tournament. His best days were spent with Kathy and family. They would spend a week in Acapulco, Mexico, many years in the winter. They loved to travel, bowl, and play cards, especially bridge. Pete is survived and lovingly remembered by his two children, John (Michelle) Cassidy and Terri Cahill; five grandchildren, Jason Cassidy of Lincoln Nebraska, Jessica Troyna of Waverly, Sam and Sarah Fett, and Bradey Adams of Cedar Rapids; eight great-grandchildren, Keegan, Chloe, Treymier, Whitney, Cooper, Laila, Declan, and Wyatt. He was preceded in death by his wife, Kathryn Cassidy, who passed away April 4th, 2021; parents; and six siblings, Art, Jim, Earl, Lucille, Jesse and Loretta. In lieu of flowers, the family asks that you donate to your favorite charity. Please share a memory of Milo at www.murdochfuneralhome.com under obituaries.

The family of Milo Cassidy created this Life Tributes page to make it easy to share your memories.

Send flowers to the Cassidy family.