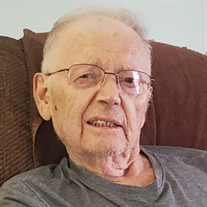 Norbert Edwin Regnier, 86, of Marion, Iowa, passed away Saturday, October 3, 2020, at the Ed & Joan Hemphill Hospice Unit at St. Luke’s in Cedar Rapids, Iowa. Family will greet friends from 5 to 7 p.m. on Wednesday, October 7, 2020, at Murdoch Funeral Home & Cremation Service in Marion. A Funeral Mass will be held on Thursday, October 8, 2020, at St. Joseph Catholic Church in Marion, conducted by Reverend David O’Conner. Burial will follow at Mt. Calvary Cemetery in Cedar Rapids, Iowa. All guests are respectfully requested to wear a face mask and practice social distancing. Norbert was born October 1, 1934, in Ghent, Minnesota, the son of Phillip J. and Evelyn L. (Wyffels) Regnier. He graduated from Lynd High School and then served honorably in the United States Air Force from 1953 to 1957. Norbert went on to study at Brown Institute in Minneapolis, where he met his future wife at a dance. He was united in marriage to Mary Elizabeth Sirek on May 14, 1960, in Veseli, Minnesota, the couple then moved to Marion, Iowa. To this union two sons were born. He worked for Rockwell Collins as an electronics technician, retiring in 1989. Norbert enjoyed dancing, big band music, watching westerns, football, and basketball. He especially enjoyed gardening with his wife, cooking, and tending to his yard and two apple trees. Norbert is survived and lovingly remembered by his two sons, Kenneth and Kevin Regnier both of Marion; and one brother, James (Edna) Regnier of Marshall, Minnesota. He was preceded in death by his parents; wife, Mary Regnier in 2012, and four siblings, Eileen, Delores, Gerald, and Elroy.

The family of Norbert Edwin Regnier created this Life Tributes page to make it easy to share your memories.

Send flowers to the Regnier family.