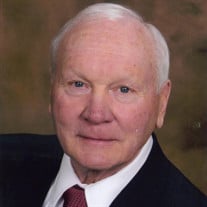 Norman “Norm” Eugene Hutton, 86, of Marion, Iowa, passed away on Tuesday, January 5, 2021, at his residence in Marion. Norm was born on March 22, 1934, on a farm near Deep River, Iowa, the son of Guy “Jim” and Veneita (Darland) Hutton. He graduated from Montezuma High School in Montezuma, Iowa. Norm was united in marriage to Shirley Holmes on July 4, 1953, at Sacred Heart Catholic Church in Monticello, Iowa. Norm’s career started with the Gordon Hatchery in Marion. While with the hatchery, he served two years with the United States Army, stationed in France. He later attended Iowa State University and received his Doctor of Veterinary Medicine Degree in 1966. Furthering his experience with computers, obtained in the army, he received a Master’s in Computer Science from Iowa State University and established the Department of Biomedical Communications in the Iowa State University College of Veterinary Medicine. During his 11 years at the university, he advanced to full professor and was promoted to Assistant Dean and Director of Biomedical Communications. Norm continued to teach and serve as consultant to zoos in the United States, setting up computer systems for animal data recording, and served on various national and international veterinary associations and committees. In 1977, Norm was selected to be Assistant Dean of the College of Veterinary Medicine at Oregon State University. They were just starting to build their veterinary school and he was instrumental in developing the college, teaching students and ensuring its’ accreditation for his remaining 20 years. After retiring in 1997, as interim Dean, Norm was elected to be Vice President of the American Veterinary Medical Association. He and Shirley traveled to many veterinary schools during this two-year position as the official liaison to the Student American Veterinary Medical Association and its chapters. Norm and Shirley then moved to Bend, Oregon, built a house, learned to downhill ski, enjoyed time with friends and continued to travel. After a few years, they returned to Iowa to be closer to family, as some were in declining health. While in Iowa, Norm accepted a position at the Iowa State University College of Veterinary Medicine as a consultant. His extensive knowledge of veterinary medicine, education, and administration was used to support and build the Iowa State University programs. In 2009, Norm was the recipient of the Stange Award, the Iowa State College of Veterinary Medicine’s highest recognition. After Shirley’s mother passed away, they decided to move to Meridian, Idaho, and lived for a few years close to their son, Dennis and his wife Teresa. They continued their skiing, rode snowmobiles, white water rafted, and traveled. Norm and Shirley had a special fondness for Ireland and France. Norm never hesitated to rent a car, drive to the next Bed and Breakfast, or interact with the non-English speaking residents. With most of the family in the Midwest; they elected to make one final move and returned to Marion, Iowa, in 2012. Norm is survived by his two sons, Dennis (Teresa) Hutton of Boise, Idaho and Gordon (Brenda) Hutton of Aplington, Iowa; two grandchildren, Jacob Hutton of Aplington and Jodie (Brandon) Hageman; four great-grandchildren, Weston Hutton, Cayden, Collin, and Elizabeth Hageman all of Fowler, Kansas; sister, Gelene Stevens of Ankeny, Iowa; sisters-in-law, Janet Vasey and Dennis Charipar of Marion, Iowa, Marilyn and Marlin Chaplin of Genoa, Illinois, and Terry and Craig Eilbert of Marion, Iowa; and many nieces and nephews. He was preceded in death by his wife, Shirley; parents, Jim and Veneita Hutton; and his in-laws, Elmer and Catherine Holmes. In agreement with Norm’s wishes, cremation has taken place. A private Funeral Mass will be held at St. Joseph Catholic Church in Marion. A Committal Service will follow at Oak Shade Cemetery in Marion. In lieu of flowers, memorials in Norm’s name may be directed to the Hutton International Veterinary Scholarship fund at the College of Veterinary Medicine, Iowa State University Foundation, at Iowa State University, or the charity of your choice.

The family of Norman "Norm" Eugene Hutton created this Life Tributes page to make it easy to share your memories.

Send flowers to the Hutton family.