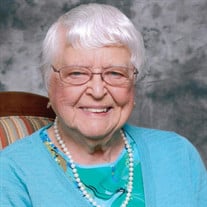 Olive Naomi (Wetzel) Port, 100, of Marion, Iowa, passed from this world into her heavenly home on Saturday, February 20, 2021. In agreement with her wishes, cremation has taken place. There will be no services held at this time. A celebration of Olive’s life is being planned with an updated announcement to be published in the spring of 2021. Committal services will take place later at Cedar Memorial Park Cemetery in Cedar Rapids, Iowa. Olive was born on March 23, 1920, on a farm in Atkins, Iowa, the second of four daughters to Byron Everett and Viola Frances (Weis) Wetzel. She had attended a country school and later attended school at McKinley and high school at Roosevelt in Cedar Rapids. During Olive’s junior year, her family moved to a farm two miles east of Springville, Iowa, where she attended and graduated from Springville High School. On August 26, 1940, Olive married Roland Hoag Port at her home in rural Springville. After residing a short time in Martelle, Iowa, they moved to a farm two miles northwest of Martelle. For over 30 years, they farmed together with Roland’s brother, Nathan who married Olive’s sister, Fern. To Olive and Roland’s union, three children were born: Roger Charles, Janet Lee and Dale Roland. Olive loved to garden, can food, raise and process chickens, and was a loving supportive mother. She was a great cook and liked to cook many different foods. Olive loved to picnic with relatives and family. She attended the Martelle Methodist Church, where she was in a circle and supported many church activities. She and Roland belonged to a community card club and later square danced where they met many neighbors. She also belonged to the Martelle Pythian Sisters and the Marion Garden Club. Because Olive liked to meet and talk to people, she had many longtime friends in the Springville, Martelle, Anamosa and Marion areas. In 1972, Olive and Roland retired from farming and moved to Marion, Iowa, where they became active members of Marion Methodist Church. They both became excellent and prolific quilters, making quilts for friends, family and the church. Olive walked a mile every day to the Marion Library, where she loved to read. Roland passed away in 1988. In 2008, Olive moved to Summit Pointe Independent Living Facility in Marion, where she remained the rest of her life, receiving good care. Her 100th Year birthday celebration was planned for March 23, 2020, but was cancelled due to the pandemic. Instead, Olive talked to family on Skype. During her isolation due to the pandemic, she communicated with her family through Zoom, and her niece and nephew who live nearby visited her in person almost weekly through Hospice compassionate care. Olive set an example for her extended family and others of a life well lived. She will be greatly missed by all who knew and loved her. Olive is survived and lovingly remembered by her children; Roger (Sheila) Port of Franklin, Tennessee, Janet (Gary) Ellis of Plano, Texas, and Dale (Marty) Port of Ankeny, Iowa; one sister, Pauline Falcon of Marion; one sister-in-law, Margaret “Mickey” Smith of Wisconsin; eight grandchildren; eighteen great-grandchildren; two step-grandsons; four step great-grandchildren; and many nieces and nephews. In addition to her husband, Roland; she was preceded in death by her parents; one daughter-in-law, Diane Port; and two sisters: Fern Port and Iva Mae Letner. In lieu of flowers, memorial donations in Olive’s memory may be made to St. Croix Hospice, American Cancer Society, or Marion Methodist Church.

Olive Naomi (Wetzel) Port, 100, of Marion, Iowa, passed from this world into her heavenly home on Saturday, February 20, 2021. In agreement with her wishes, cremation has taken place. There will be no services held at this time. A celebration... View Obituary & Service Information

The family of Olive Naomi Port created this Life Tributes page to make it easy to share your memories.

Send flowers to the Port family.