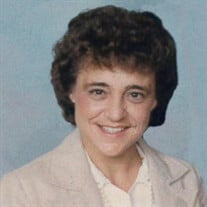 Patricia Carter, 75, of Marion, Iowa, passed away on Tuesday, March 8, 2022, at the University of Iowa Hospitals & Clinics in Iowa City, Iowa. A funeral service will be held at 3:00 p.m. on Sunday, March 20, 2022, at Murdoch Funeral Home & Cremation Service in Marion, Iowa, where family will greet friends and family one hour prior to the service at the funeral home. Burial will take place at a later date at Indiana Chapel Cemetery in Attica, Iowa. Patricia was born on December 26, 1946, in Oskaloosa, Iowa, the daughter of Harold Paul and Della Ruth (Roorda) Parker. She was a 1964 graduate of Albia High School. Patricia went on to attend the University of Iowa and Vernard College in Oskaloosa. In November 1966, Patricia married Raymon Wilson in Albia, Iowa; divorced in 1971. In January of 1972, Patricia married Grady Carter in Marion; divorced in 1997. She worked as a CNA for several area nursing homes and also managed several restaurants. Patricia was a member of Noelridge Christian Church and the Marion Legion Auxiliary. She was also active in Marion politics. Patricia was passionate about her church, politics, and especially her grandchildren. She will be greatly missed by all who knew and loved her. Patricia is survived by her four children, Audrey (Robb) Alt of Cedar Rapids, Paul (Amy) Carter of Dubuque, Iowa, Tony Carter of Cedar Rapids, and Priscilla Davis of Batesville, Arkansas; seven grandchildren, Alexander, Brandon, Nathan, Crystal, Elizabeth, Jenna, and Raymond; thirteen great-grandchildren; four sisters, Dorothy (Don) Engelking, Dixie Harndon, MaryAnn Schramm, and Bonnie (Randy) Williams; and many nieces, nephews, and cousins. She was preceded in death by her parents, Harold and Della Ruth Parker; son-in-law, Hoppy Davis; brother-in-law, Don Schramm; and nephew, John Major. Memorials in Patricia’s memory may be made to either; the Wounded Warrior Project, P.O. Box 758516 in Topeka, Kansas, 66675-8516 or to National Multiple Sclerosis Society, P.O. Box 91891 in Washington, D.C, 20090.

Patricia Carter, 75, of Marion, Iowa, passed away on Tuesday, March 8, 2022, at the University of Iowa Hospitals & Clinics in Iowa City, Iowa. A funeral service will be held at 3:00 p.m. on Sunday, March 20, 2022, at Murdoch Funeral Home & Cremation... View Obituary & Service Information

The family of Patricia Carter created this Life Tributes page to make it easy to share your memories.

Patricia Carter, 75, of Marion, Iowa, passed away on Tuesday,...

Send flowers to the Carter family.