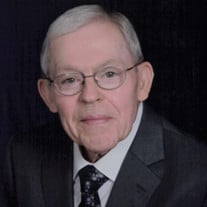 Paul L. Clarahan, 85, of Marion, Iowa, passed away on Tuesday, September 21, 2021, at The Views of Marion. A Vigil Service will be held at 4:00 p.m. on Tuesday, September 28, 2021, at Murdoch Funeral Home & Cremation Service in Marion. Visitation will follow the service from 4:30 to 7:00 p.m. at the funeral home. A Funeral Mass will be held at 10:30 a.m. on Wednesday, September 29, 2021, at St. Joseph’s Catholic Church in Marion, with an additional visitation one hour prior to the service. Reverend David O’Connor will officiate. Inurnment will take place at a later date at Mt. Calvary Cemetery in Cedar Rapids, Iowa. Paul was born on August 6, 1936, in Harper, Iowa, the son of Richard and Veolet (Sondag) Clarahan. He graduated from St. Elizabeth High School in Harper and went on to serve honorably in the United States Army. On Jan 17, 1959, Paul was united in marriage to Eileen Menke at St. Elizabeth Catholic Church in Harper. Paul worked for Mid-Continent Bottlers for over 41 years, retiring as the Eastern Region General Manager in 1999. He enjoyed traveling, golfing, spending time in the sun, and going for walks, whether in the neighborhood or on the beach. Paul and Eileen enjoyed many years vacationing at Myrtle Beach. He loved spending time with his family, especially watching his grandchildren’s events and sports. Paul will be greatly missed by all who knew and loved him. Paul is survived and lovingly remembered by his wife, Eileen Clarahan of Marion; four children, Joseph Clarahan of Marion, Janice (Jim) Russell of Cedar Rapids, John (Lisa) Clarahan of Cedar Rapids, and Jim (Chelli) Clarahan of Robins; five grandchildren, Ashley (Craig) Meskimen, Tyler (Whitney) Clarahan, Whitney (Thad) Washburn, Kelsey Clarahan, and Logan Clarahan; seven great-grandchildren, Charley, Claire, and Lucy Meskimen, Mescher and Chance Clarahan, Mason and Stella Washburn; and one sister, Marietta Smeaton of Davenport, Iowa. He was preceded in death by his parents, Richard and Veolet Clarahan; two brothers, Donald Clarahan and Charlie Clarahan; and one sister, Kathleen Duwa. Memorials in Paul’s memory may be directed to either St. Joseph’s Catholic Church, St. Joseph’s Catholic School, or to the Xavier High School Foundation. Paul’s family would like to extend a special thank you to the caring staff at The Views of Marion for the care that he received.

The family of Paul L. Clarahan created this Life Tributes page to make it easy to share your memories.

Send flowers to the Clarahan family.