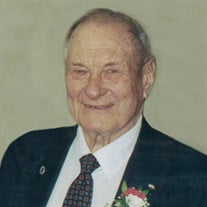 Paul R. Nielsen, 94, of Springville, Iowa, passed away on Sunday, March 6, 2022, at The Views in Marion, Iowa. A Masonic Service for the public will be held at 3:30 p.m. on Wednesday, March 9, 2022, at Murdoch Funeral Home & Cremation Service in Marion. Masons are asked to meet at 3:00 p.m. at the funeral home on Wednesday. Following the Masonic Service, a visitation will be held from 4:00 – 7:00 p.m. Wednesday, at the funeral home. A Funeral Service will take place at 10:30 a.m. on Thursday, March 10, 2022, at the United Methodist Church in Springville, where an additional visitation will be held one hour prior to the service. The Reverend Guillermo Bongolan will officiate. Burial will follow at Springville Cemetery in Springville. Paul was born on January 17, 1928, at home in Springville, Iowa, the son of Peter Marius and Esther Lenore (Gibson) Nielsen. He graduated from Springville High School in 1945. On February 8, 1958, Paul was united in marriage to Karen Marie Krug at St. Stephen’s Lutheran Church in Atkins, Iowa. To this union, two children were born, Steve and Sue. At a young age, Paul began doing carpentry work which lasted a lifetime. He built and remodeled homes and remodeled banks for Ernie Buresh. For 50 years, Paul sold insurance for IMT through Lang Insurance in Springville. He was also a life-long farmer. Paul was a member of the Springville United Methodist Church in Springville since 1938, joining at the age of 10. He was recently recognized in November of 2021, as the oldest member of the church. Paul later remodeled the church’s sanctuary and built the addition of Scott Hall. He also built the Presbyterian Manse in Springville. Paul was also a member of the Springville Masonic Lodge #139, the El Kahir Shrine, Scottish Rite, and for years he served on the Springville School Board, of which he was president. Paul was an avid sports fan, and especially enjoyed baseball. He was a loyal Chicago Cubs and Chicago Bears fan. He loved food, especially desserts and sweets, and he never missed a meal. Paul loved spending time and sharing meals with his family. He was a jokester who loved pulling pranks and had a personality that was larger than life. Paul will be greatly missed by all who knew and loved him. Paul is survived and lovingly remembered by his son, Steve Nielsen of Springville; daughter, Sue (Terry) Soukup of Springville; two sisters-in-law, Audrey (Dave) Glasgow of Victor, Iowa, and Sharon Nielsen of Whittier, Iowa; two brothers-in-law, David Lensch of Cedar Rapids and Everett (Krista) Krug of Gainesville, Florida; and seven nieces and one nephew. He was preceded in death by his parents; wife of 61 years, Karen Nielsen; brother, Norman Nielsen; sister-in-law, Inez Lensch; and his beloved beagle dog “Barney”. Memorials may be made in Paul’s memory to Camp Courageous, 12007 190th Street, Monticello, Iowa, 52310; El Kahir Shrine Transportation Fund, 905 Tower Terrace Road, Hiawatha, Iowa, 52233; or a favorite charity of the donor’s choice. Paul’s family would like to express their heartfelt gratitude to all the staff at both The Views of Marion and 6 Center at St. Luke’s for all the love, care and support they gave to him during the last couple years. It will never be forgotten.

Paul R. Nielsen, 94, of Springville, Iowa, passed away on Sunday, March 6, 2022, at The Views in Marion, Iowa. A Masonic Service for the public will be held at 3:30 p.m. on Wednesday, March 9, 2022, at Murdoch Funeral Home & Cremation Service... View Obituary & Service Information

The family of Paul R. Nielsen created this Life Tributes page to make it easy to share your memories.

Send flowers to the Nielsen family.